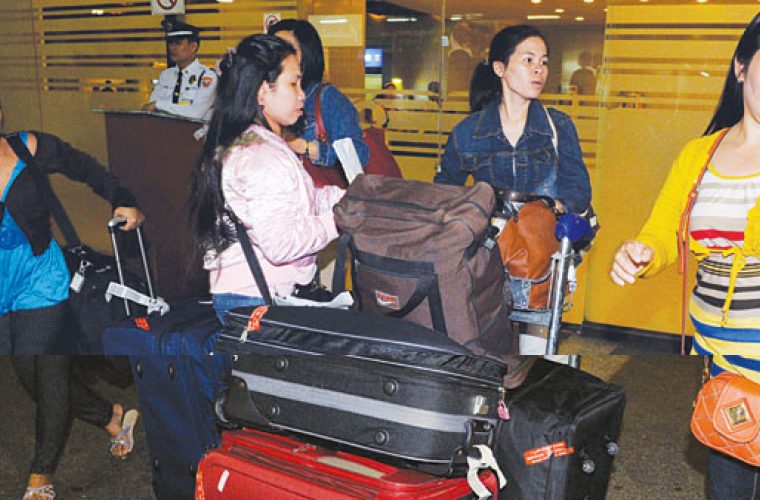 Thirty Filipino workers expelled from Saudi Arabia returned home yesterday and alleged they were abused amid a crackdown on illegal migrants there. They were among an estimated 6,700 Filipino workers stranded in parts of the oil-rich Middle Eastern kingdom where an amnesty for undocumented foreigners ended over the weekend. “They treated us like animals,” said domestic helper Amor Roxas, 46, who burst in tears while narrating her ordeal. She claimed Saudi police rounded them up and placed them in a crowded cell for four days before they were paraded from the immigration centre to the airport. “Our feet were chained,” added Yvonne Montefeo, 32, in between sobs. Saudi Arabian embassy officials in Manila did not want to comment on the allegation of abuse. Migrante International, a support group for Filipino overseas workers, said 1,700 other workers remained stranded in Jeddah waiting for their documents to be processed so they can return home while about 5,000 more were scattered in Riyadh, Al Khobar and Dammam and also needing consular assistance. It warned that the Filipinos “are in danger of being violently dispersed, arrested and detained by authorities” as the kingdom implements its crackdown. The Filipinos are among tens of thousands of mostly Asian unskilled workers likely to be expelled, the group said. Vice President Jejomar Binay, who is also presidential adviser on migrant affairs, last week appealed to the Saudi government to extend its deadline, noting that “thousands are still hoping to correct their employment status”. “Due to the large number of Filipino workers seeking correction of their employment status, many of them may not be able to meet the Nov 3 deadline,” he said in a letter to King Abdullah last week. The crackdown started early this year, but the Saudi government offered an amnesty to allow the workers to legalise their stay. Binay said more than 4,000 Filipinos had been repatriated since the crackdown was announced, while 1,716 are waiting for their exit documents to be processed even as the deadline expired Sunday. About a tenth of the Philippines’ population live and work abroad, and their dollar remittances are a vital pillar of the economy. A vast majority of them work as unskilled labourers or maids, and are exposed to situations whey they are prone to abuse. http://www.gulf-times.com/asean-philippines/188/details/370607/filipinos-allege-abuse-in-immigration-crackdown