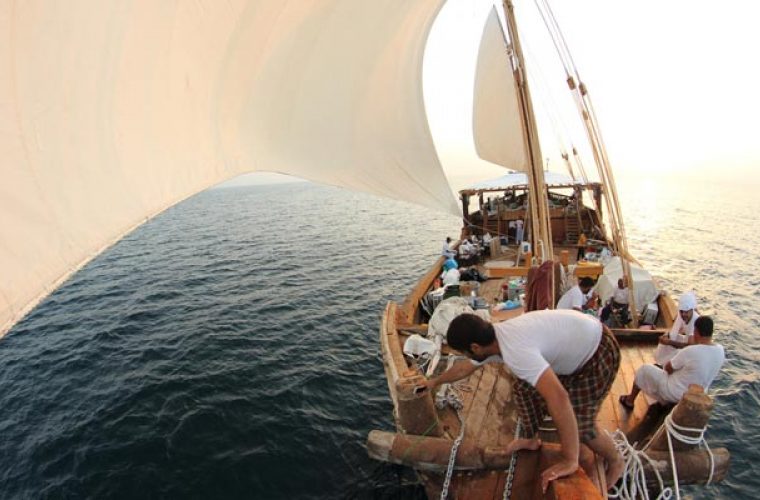 Qatari dhow Fath Al-Khier 2 arrived in Oman’s Sur port where it docked for three days as scheduled prior to heading to India. However, bad weather will delay the departure of the boat from Sur.
Omani officials were hosted on board Fath Al-Kheir 2 and briefed on the course of the voyage. Fath Al-Khier 2 also received children of the city of Sur, in a gesture that confirms the link of youth with the history of their ancestors. It is a traditional heritage that connects Gulf countries and considered as the strongest bond among these nations.
A cultural evening was held by the residents of Sur on the occasion of the arrival of the dhow. The event was held in the majlis of Sheikh Ali bin Mohamed al-Hashaar, where they were also received by a candidate of the Consultancy Council, Jihad bin Abdullah al-Finnah.
Speaking on the occasion, the director of tourism in Oman Saud bin Hamad al-Alwai said, “We are pleased to have Fath Al-Khier 2 in Sur during its way to India. This is an historic journey that familiarises the youth of the Gulf states with the ancient legacy of their forefathers”.
Abdullah bin Salem, the member of the Omani Consultancy Council, said: “We welcome the arrival of Fath Al-Khier from Qatar. We are also delighted to know that Sur is becoming a station for this historic voyage to India, which reminds us of the traditional trade route that our forefathers had to follow in long and exhausting journeys pursuing their livelihood. It is great to see the fidelity from a group of youth, who were enthusiastic to take up this experience that embodies a real simulation to what used to be in the past”.
The shipmaster, Hassan al-Kaabi, said: “Since our departure from Katara’s beach, the weather was fine and we encountered no dangers or exceptional mishaps. This had led us to arrive in Sur safe and earlier than the scheduled time.”
With regard to the journey, Hassan al-Kaabi said that all sailors are enthusiastic and brave. They are ready to resume this exceptional experience which is a continuation of the first Fath Al-Khair voyage. However, it is different in some aspects such as the duration of the journey as well as the long distance to India.
“This, in turn, requires full compliance with the shipmaster’s orders to ensure safety on board is maintained. Tasks were also allocated among ourselves to ensure work on board is done in a smooth manner,” he added.
The voyage of Fath Al-Khier 2 to India is gaining considerable media attention both locally and internationally, including Indian media. Qatar TV is the exclusive broadcaster of Fath Al-Khair and will air a weekly episode to update the public on the voyage, starting from the beginning of November.
This historic journey is being sponsored by Qatar Gas Transport Company Ltd. (Nakilat) as a gold sponsor, and Qatar TV as an official broadcaster.