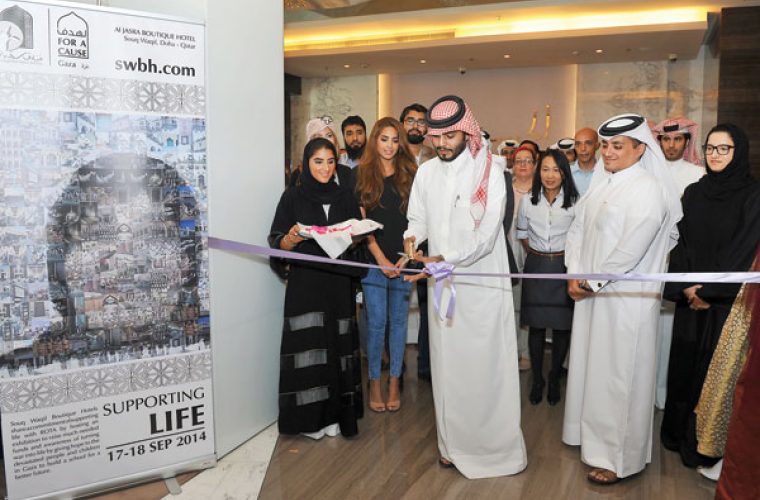 An exhibition was launched in Doha yesterday to raise funds for rebuilding of schools in the war-torn Gaza.

‘For A Purpose’ exhibition organised by Souq Waqif Boutique Hotels (SWBH) is being held at Al Jasra Boutique Hotel, in cooperation with Reach Out To Asia (Rota).

The exhibition is designed for owners of small and medium enterprises (SMEs) to showcase their products and the proceeds from the exhibition will go to support Rota’s initiative of building Gaza schools.

Several Qatari institutions and young entrepreneurs are putting their products on display and contribute to supporting SWBH’s initiative to rebuild Gaza schools destroyed by the recent Israeli aggression.

“It is heartwarming to see some of Qatar’s finest institutions and young, promising faces support our first CSR exhibition, through which we seek to accomplish the two-fold objective of contributing to Rota’s rehabilitation of Gaza schools and helping Qatari entrepreneurs to exhibit their products,” Taleb Al Henzab, SWBH General Manager told a press conference yesterday.

“Being part and parcel of the Qatari society, this is the least we can do to stand by Gazans and the Palestinian people and support their vital educational system by rehabilitating the damaged schools to help children get back to school as soon as possible,” he added.

Bouthaina Mohammed Al Obaidli, coordinator at ROTA said the organization was planning to build about 22 schools in five Arab countries including those to be built in Gaza. She said that the funds collected from the event will go for the Gaza schools.

Imran Ali one of the sportswear exhibitors said that there is not fixed prices for their garments as this was a charitable initiative in which the buyers were expected to give more to support the people of Gaza. The underlying aim was not to sell the products but to raise money for the people of Gaza.

“It’s an honour to be part of SWBH’s exhibition which promotes the humanitarian initiatives championed by our beloved Qatar,” said Abdullah Faleh Al Saeed, owner of Pick & Shake who are also participating in the exhibition.