Expert at NU-Q 'Big Data' Symposium: Equivalent of over 100 million years of video expected by 2015 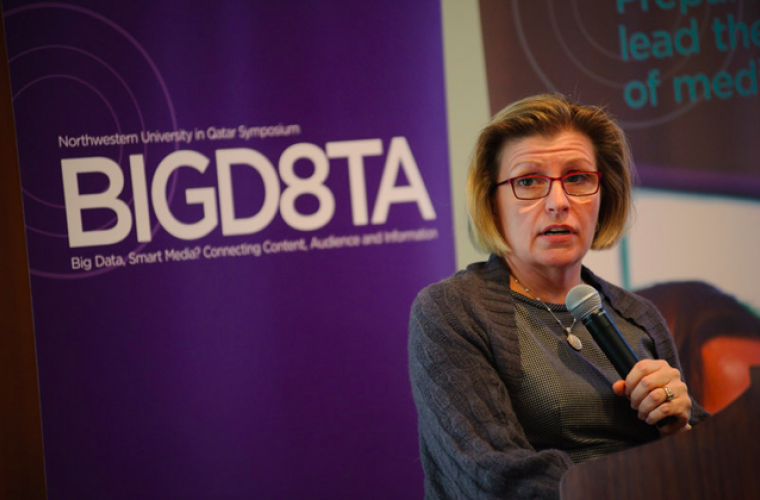 Speakers urge responsible use of Big Data, and encourage journalists to continue searching for powerful information

Doha, Qatar – 20 November, 2013 – The world is projected to produce 8 zettabytes of digital content by 2015, the equivalent of over 100 million years of video, Big Data expert Martha Stone told attendees of Northwestern University in Qatar's symposium yesterday. 80% of this data, she said, continues to be unstructured and disorganized, especially as it is generated by audiences on platforms such as Twitter and YouTube. Stone, who is a fellow at the University of Oxford's Reuter's Institute and leads the World Newsmedia Network, gave a presentation on the use of Big Data in surveillance, and urged her audience to be mindful and responsible in their use of Big Data. According to Stone, the PRISM program created by the National Security Agency to track information costs $20 million dollars, " it remains unclear yet what the [US] government is doing with the vast data that is being collated and analyzed by artificial intelligence." Big data is a label used to describe data sets with sizes and complexities well beyond the capabilities of day to day statistical software. Analysts argue that the rise of digital and mobile communications have accelerated the growth of these immense databases. During her presentation at NUQ's symposium "Big Data, Smart Media? Connecting Content, Audience and Information," Stone also announced that World Newsmedia Network would be holding their next Big Data conference at the Microsoft headquarters in 2014. Stone spoke alongside several leading Big Data scholars and journalists including NU professor Larry Birnbaum, co-director of the Intelligent Information Laboratory at the McCormick School of Engineering and Applied Science, Kathy McKewon Director, Institute for Data Sciences and Engineering at Columbia University, and Darnel Moore, Managing Partner at Perception Consulting, who spoke about how sports marketers can use Big Data to better understand and influence fan behavior. "Big Data has been studied by a range of experts in their various fields, whether in engineering, computer science or business analytics. The subject has powerful implications for journalists and other media professionals, so we've been lucky to be able to gather the right people at the right place, here at NU-Q, to speak to the community about how Big Data can and will affect their world," said Everette Dennis, Dean and CEO of NU-Q. "I've been particularly pleased with the interest in the subject expressed by our students, for whom Big Data holds enormous potential," he added. The panel discussions included Mohammed Haddad, a Data Journalist at Al Jazeera Network who is responsible for creating visualizations in the newsroom. Haddad used his experience in visually mapping the locations of rebel groups in Syria to explain what a journalist should look for in Big Data. Haddad reminded the young journalists that data is an abstraction of the real world and that its presence on a screen should not deter them from "going out and getting [your] own data." "You must ask yourself how much detail your audience is actually looking for," said Haddad. "The story is in the outlier, but the story might also be that there is no data." Haddad also said that Al Jazeera was increasingly looking to equip journalists with the tools to mine through Big Data and use the results in their stories, and that the Network is soon to host the Mozilla Foundation for a training course for Al Jazeera staff. Communication Senior Rawan Al Thabatah, said the symposium had revealed to her a "new exciting challenge that will force us to move even quicker as communicators, but will also allow us to be constantly up-to-date. The information I saw today, especially from NU-Q presenters, was fascinating and unexpected." - ILQ News -