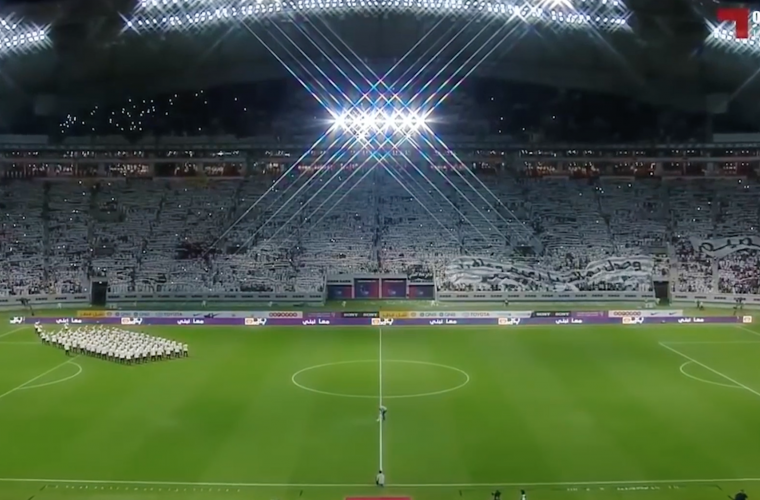 First constructed in 1976, Khalifa International Stadium has become one of the Qatar’s best-known landmarks. Its capacity was doubled to 40,000 with extensive renovations prior to the 2006 Asian Games. These saw the construction of an enormous (seated, but uncovered) eastern terrace. Other uncovered seating raised capacity to 48,000 for the 2011 Asian Cup (of which Qatar were hosts).

As the largest stadium in the country, and in a state of general good repair, Khalifa was always going ‘competition ready’ first, and so it proved, as it was re-inaugurated Friday, May 19, 2017, and hosted its first game that night for the prestigious Emir Cup final. What had the Supreme Committee for Delivery & Legacy (SC) done to Khalifa to get it up to the required standard? Whack a roof on? Lick of paint? Er… Not exactly.

Football fans enjoyed an open-air stadium cooled to optimal conditions, utilizing innovative cooling technology which employs up to 40% less energy than conventional systems. “We’ve designed the cooling technology at Khalifa to be energy-efficient, and fully compliant to the SC standards in terms of field of play and spectator seating area temperatures to reach 26 degrees centigrade,” said Dr. Saud Abdul-Aziz Abdul-Ghani, of Qatar University.

A cooling plant one kilometre away from the stadium pumps chilled water to the stadium via pipeline. Once there the chilled water is used to cool air which is blown onto the field of play and spectator seating areas.

Need a new roof? Try the appliance of science

However, one doesn’t want all this expensively-cooled air to waft away into the Doha night, so extensive testing was at the venue and before installation at Qatar University, in order to optimize the stadium design for the required air-flow on match days.

“Wind was the factor that we considered the most in order to ensure that the cold air was not taken out of the arena. This is the first ever open-roof stadium of this size to be air-cooled, and it will allow a lot of events to take place here throughout the year, added Dr Abul-Ghani”

The very much more ‘enclosed’ nature of the new roof and how it’s attached to the stands beneath meant that the expansive east terrace had to go, and a shallower stand, yet with more spectator room, means that the capacity has now been reduced to 40,000, and there it will stay.

So we have cooling facilities, new stands, a new roof… and we’re not finished yet. The main stand has been massively upgraded with a new section of VIP suites, upgraded changing rooms, a new press area (definitely much needed!) and a sports museum.

While on any given match-day, Khalifa’s changing rooms might be crammed with footballing talent, the players aren’t going to be able to express themselves unless the surface is absolutely perfect. That, too, is taken care of by SC having built their own ‘Turf Nursery’ at the Aspire Zone. The hybrid pitch – which allowed the ball to move so effortlessly on the even of the Emir Cup final – was grown here, and the Turf Nursery will supply the surfaces for all of the 2022 World Cup venues.

The re-developed Khalifa venue will host group games at the upcoming 2022 tournament, and also up to the quarter-final stage. After that, it will return once again to being Qatar’s National Stadium but, as we see, hardly unchanged.

Qatar Football Association President, Sheikh Hamad bin Khalifa bin Ahmed Al Thani, said: “Khalifa International Stadium is close to Qatari hearts and has seen some of Qatar’s biggest sporting occasions since 1976. It was therefore a fitting venue for the biggest match of Qatar’s football calendar, the 2017 Emir Cup final between Al Rayyan and Al Sadd. I’m glad the fans got to enjoy this event in such a magnificent, re-modeled stadium.”

Were you in the stands at this year’s Emir Cup Final held on May 19? What did you think of the newly refurbished Khalifa International Stadium? Drop us a line and tell us your thoughts in the comments below and don’t forget to give us a like and a share – it keeps us going!