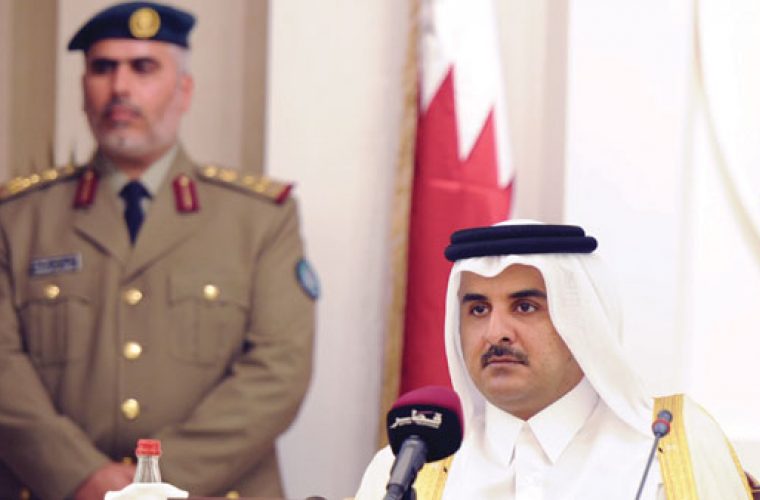 Speaking at the opening of a new term of the Advisory Council, HH Sheikh Tamim says a governmental committee has been set up to propose necessary solutions to control any internal or external inflationary pressures QNA Doha HH the Emir Sheikh Tamim bin Hamad al-Thani yesterday promised that the government would seek “to contain price rise by all available means and tools”. Inaugurating the 42nd ordinary session of the Advisory Council in the presence of HH the Father Emir Sheikh Hamad bin Khalifa al-Thani, HH Sheikh Tamim said a governmental committee had been set up to propose necessary solutions to control any internal or external inflationary pressures. “Inflation has a negative effect on growth and society and because of that price rise is a problem that worries everyone,” he said. “Individuals, civil society organisations and the Chamber of Commerce and Industry of Qatar must play their roles and endeavour to avoid any unjustified price rise, because it is a joint responsibility and the role of those institutions is no less important than that of the state in this area,” the Emir said. “The government will seek to contain it (inflation) by all available means and tools, and, in particular, through the monetary and fiscal policies, combating monopoly, encouraging competitiveness, setting an appropriate timetable to invest in major projects and co-ordinating between these projects to avert being concentrated in a short period of time leading to pressure on the available potential capacity.” The Emir noted that Qatar’s economy had sustained its accomplishments as per the state’s vision and strategy. This was achieved, he noted, “despite global economic uncertainty and instability that prevent complete recovery from the successive crises that afflict a number of advanced and emerging economies alike”. He emphasised the need to diversify the structure of the Qatari economy, with the participation of the private sector and “encouraging private initiatives that can identify the potentials and market needs in the context of price control and development planning of the country”. Turning to Qatar’s foreign policy, HH Sheikh Tamim emphasised that Qatar had always acted to strengthen the Gulf Co-operation Council (GCC) and achieving integration among its states and bolstering Arab solidarity. He stressed Qatar’s full support “for the brotherly Syrian people who defend their dignity and existence on their land”. He criticised unconditional terms for a proposed peace conference on Syria, saying the talks would lead nowhere and should focus on “achieving justice” for Syria’s people. HH Sheikh Tamim said talks must “reach a political solution that recognises the Syrian people’s legitimate demands and is based on a timetable”. He denounced “attempts by some to substitute achieving justice for the (Syrian) people, who have paid the heaviest price... with unconditional negotiations that lack a timeframe and lead nowhere”. His remarks came as efforts trying to fix a date for the so-called Geneva II talks bringing all sides together to discuss a political solution to the Syrian conflict continued to face hurdles yesterday. More than 120,000 people have been killed in Syria since an uprising against President Bashar al-Assad’s regime erupted in March 2011. Syria’s opposition has refused to attend the Geneva talks unless Assad’s resignation is on the table. He stressed his full support “for the brotherly Syrian people who defend their dignity and existence on their land”. The Emir slammed the failure of the international community to stand up against the regime “that committed and is still committing crimes against humanity, and also its failure to take binding resolutions to stem the bloodshed, due to use of the veto by some countries in the Security Council, thus paralysing the ability of the council to take appropriate resolutions on the one hand, and because of the mounting double standards in international politics on the other”. The Emir underlined that the Palestinian cause would remain the focus of Qatar’s Arab and foreign policy in general. He said the “primary responsibility for the continuation of the Palestinian issue and the suffering of the Palestinians without a solution lay on Israeli intransigence and the continuation of its unjust siege of the Gaza Strip, the policy of annexation and settlement in Jerusalem and the West Bank and the occupied Syrian Golan and international leniency with this intransigence, which amounts to collusion”. He said that Qatar’s foreign policy had always been based on the “principles of peaceful coexistence and co-operation with all countries and people, mutual respect, promoting common interests, consolidating international peace and security, keenness out of our existence in the Gulf region and our Arab and Islamic affiliations, to participate effectively in the issues and concerns of our Arab and Islamic nations”. The inaugural session was attended by HH Sheikh Jassim bin Hamad bin Khalifa al-Thani and HH Sheikh Abdullah bin Khalifa al-Thani. HE the Prime Minister and Interior Minister Sheikh Abdullah bin Nasser bin Khalifa al-Thani, HE the Chairman of the Administrative Control and Transparency Authority Abdullah bin Hamad al-Attiyah and a number of ministers, heads of the diplomatic missions accredited to the state were among those present. http://www.gulf-times.com/qatar/178/details/370814/emir-vows-measures-to-contain-price-rise