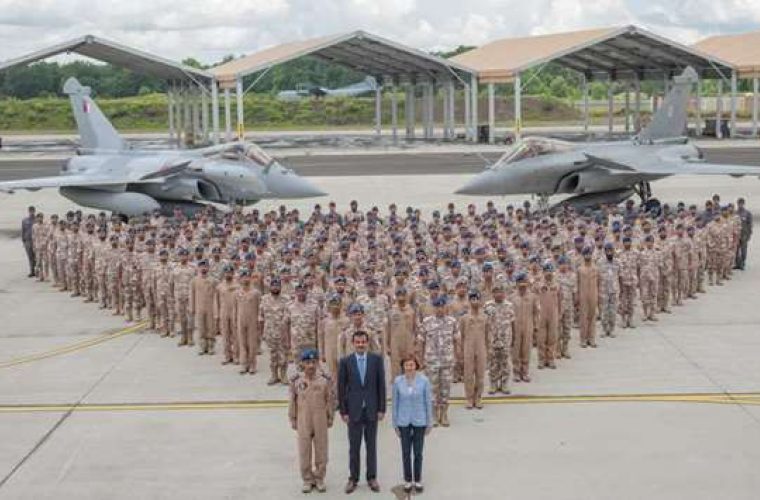 His Highness the Emir Sheikh Tamim bin Hamad al-Thani arrived in Paris Thursday evening on an official visit to France.

The Emir arrived from Mont-de-Marsan Air Base where he visited the Qatari Rafale Squadron (QRS). He was accompanied by French Defence Minister Florence Parly. They were briefed on the nature of joint defence work and the training programme for the Emir Air Force personnel as part of the QRS project in France.

Brigadier General (Pilot) Salem Abdullah al-Dosari spoke about the most prominent operations and fighting capabilities of the squadron and the joint training programme. He also briefed the Emir on what was achieved in 2015 as well as about the future plans.

The Emir was given a presentation on the Qatari Rafale plan, including details on how to fly and maintain the squadron by officers in the Qatari Armed Forces.

The Emir also met with Qatari Armed Forces officers who are part of the Rafale squadron, currently receiving training in co-operation with the French Air Force. He also visited the operations centres.

The Emir was accompanied during the visit by an official delegation and a number of Qatari military leaders of the military attache from the Qatari embassy in Paris.

He also held bilateral talks with the Frech defence minister.

They discussed military and defence co-operation and the means to enhance them. They also discussed the latest regional and international developments.

French ambassador to Qatar Eric Chevallier and several senior Qatari officers of the air base and members of the military attache at the Qatari embassy in France were also present at the airbase to see off the Amir and the accompanying delegation.

Earlier when he arrived at the airbase, the Emir was received by Parly, the mayor of Landes, General Adam, Pellissier and Colonel Gaudilliere.

He was also received by Qatar's ambassador to France Khalid bin Rashid al-Mansouri, Chevallier, Qatari officers of the air base and members of the military attache at the Qatari embassy in France.
Later in the day, the Emir hosted a dinner for senators from the ruling party and senior officials and businessmen at the Peninsula Hotel.

During the banquet, they exchanged views on co-operation and friendship between Qatar and France and ways to boost them, especially in the fields of politics, economy and investment.

The talks also dealt with regional and international developments of common concern.

The banquet was attended by members of the delegation accompanying the Emir. (Source)