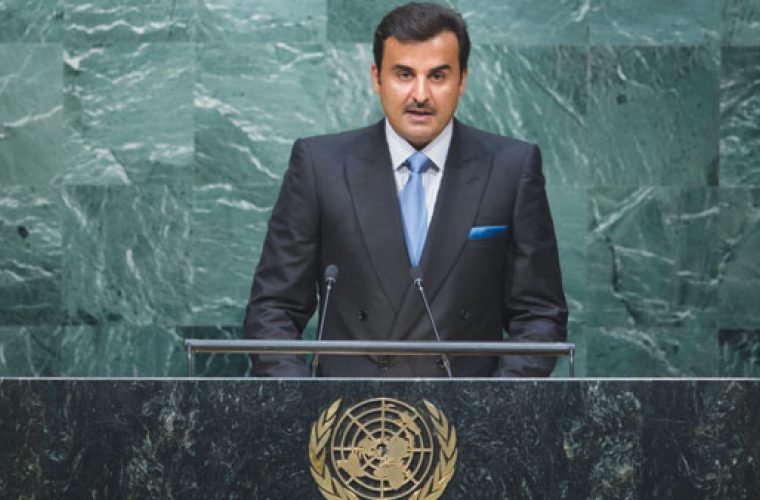 HH the Emir Sheikh Tamim bin Hamad al-Thani yesterday cautioned against “missing the opportunities” on finding a “permanent and just solution” to the Palestinian issue.
Addressing the opening meeting of the 70th session of the General Assembly at the UN headquarters in New York, the Emir said the conflict in the Middle East would continue to pose “a constant threat to international peace and security for its direct impact on many of the crises facing the region and the world”.
He said that a “just and lasting solution of Palestinian cause ... cannot be delayed to the next generation”.
“The international community, represented by the Security Council, must assume its responsibilities, by taking a firm stance forcing Israel to comply with deliverables of peace, namely, halting of all forms of settlement activity in the occupied Palestinian territories, lifting the unjust siege on the Gaza Strip and to be committed to implement the resolutions of the international legitimacy that recognise the Palestinian people right to regain their legitimate national rights, and establish an independent Palestinian State according to 1967- borders, as per the principle of two-state solution,” the Emir said.
“We caution against missing the opportunities, because if peoples reach a conclusion that there is no peaceful solution to this issue, then this would lead to unpredictable dire consequences on the region and the world.”
Touching on the Syrian crisis, he said that it was generating “catastrophic consequences for the Middle East region, and even the world, in light of the continuation of the atrocities and horrendous crimes committed by the regime against the Syrian people, the threat to the core status of the state and its people, and creating a breeding ground environment for intensifying the phenomenon of extremism and terrorism under false religious, sectarian and ethnic banners that will threat humans, community and cultural heritage in Syria and the region”.
It was incumbent on the international community to stop the massacres at the right time and provide the conditions for the Syrian people to put forward a rationale, civil and fair alternative to tyranny.
He welcomed the agreement between Iran and the 5+1 Group, describing it as “a positive and important step”.
“As we look forward with hope that this nuclear agreement contributes to maintaining security and stability in our region, we further demand moving forward to disarm the entire region of nuclear arms and weapons of mass destruction,” he said.
“In this regard we emphasise our firm position that the Gulf region must be spared of any nuclear weapons’ dangers or threats while recognising the right of countries in the region to use nuclear energy for peaceful purposes in accordance with relevant international rules.
“On this occasion, I assure that Iran is an important neighbour country, and that co-operation between it and our countries is in the interest of the region. Bilateral relations between Qatar and Iran are growing and evolving steadily on the basis of common interests and good neighbourliness. There is no dispute concerning bilateral relations between our two countries,” he said.
“At the level of the region there are various creeds and religions, but there is not, in my opinion, a Shia-Sunni conflict in essence, but rather differences that are triggered by the political interests of countries, or the interests of political and social forces that foment internal sect-centric prejudices.
“The existing disputes in my opinion, are political, regional Arab-Iranian differences, rather than being a Sunni-Shia disputes.”
He said this could be solved through dialogue, and initially agreeing on the rules governing the relationship between Iran and the Gulf States on the basis of noninterference in internal affairs.
“It is time to conduct a meaningful dialogue of this kind between countries that will always remain neighbours and are not in need of mediation from anyone.” He said that Qatar was ready to host such a dialogue.