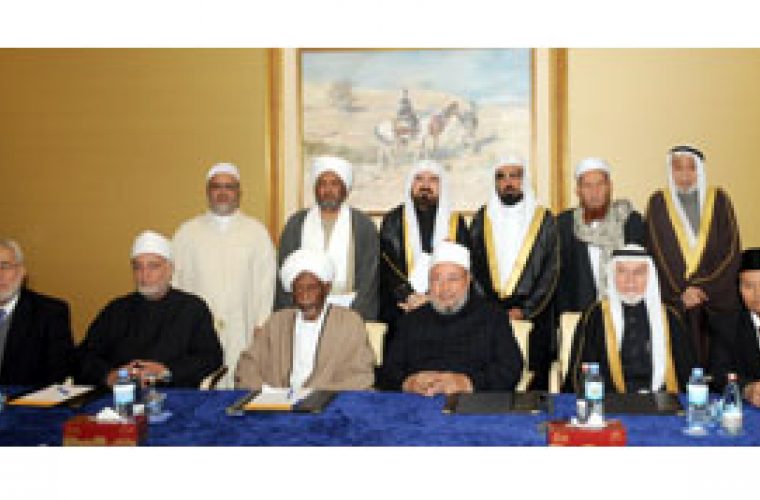 A delegation of the International Union of Muslim Scholars (IUMS), headed by Sheikh Yousuf al-Qaradawi, is to leave Qatar for Saudi Arabia today as part of a tour to meet the leaders of Arab and Muslim countries to rally their support for ending hostilities in Gaza, it was announced yesterday. The delegation will also meet leaders of Turkey, Egypt, Syria and Jordan. They will call for stepping up pressure for an immediate ceasefire. Minister of State for Foreign Affairs HE Ahmed bin Abdullah al-Mahmoud attends a meeting o Addressing a press conference, IUMS president Qaradawi said that the delegation yesterday met HH the Emir Sheikh Hamad bin Khalifa al-Thani, who wished them success in their mission. “The Emir has also provided us with an Emiri aircraft to use in our tour. Once our mission is completed, the Emir promised to provide an aircraft with food and other aid which will take us to the blockaded Gaza Strip.” However, Qaradawi added that the delegation was still waiting for permission from Jordan, Egypt and Turkey to meet their leaders. He said the delegation would urge the leaders to sever any type of ties with Israel. “We will ask for emergency summits of the Arab League and Muslim countries so that they can have a united stance on the Zionist aggression,” he said. Among other objectives was the lifting of the blockade imposed on the Gaza Strip since the Palestinian Islamic movement Hamas took control there. Asked why Iran was not on the list of countries to be visited, Qaradawi said Tehran had taken a clear stand in support of the Palestinians. “We are only visiting the countries which we feel can do more. We are not visiting big Muslim countries like Pakistan, Bangladesh and Indonesia because we are more concerned with the countries which are more influential and can be affected by the conflict,” he added. To a question whether the delegation raised the issue of the Israeli trade office in Doha during the meeting with the Emir, he said they did not because “we did not see the office affecting the pro-Palestinian policy of Qatar. If we saw such impact we would raise it. But Qatar is known for its strong and supporting stances on the Palestinian issue.” The delegation includes former Sudanese president Abdul Rahman Siwar al-Zahab, former grand mufti of Egypt Nasr Farid Wasel, head of the Indonesian advisory council Noor Waheed Hedayat, former Jordanian minister of education Isaac al-Farhan, and Islamic intellectuals Isam al-Bashir of Sudan, Salman al-Ouda and Abdullah Nasif of Saudi Arabia, Abdul Wahab al-Dilami of Yemen, Ahmed al-Raisouni of Morocco, and Ali al-Qurradaghi of Qatar. http://gulf-times.com/site/topics/article.asp?cu_no=2&item_no=264565&version=1&template_id=36&parent_id=16