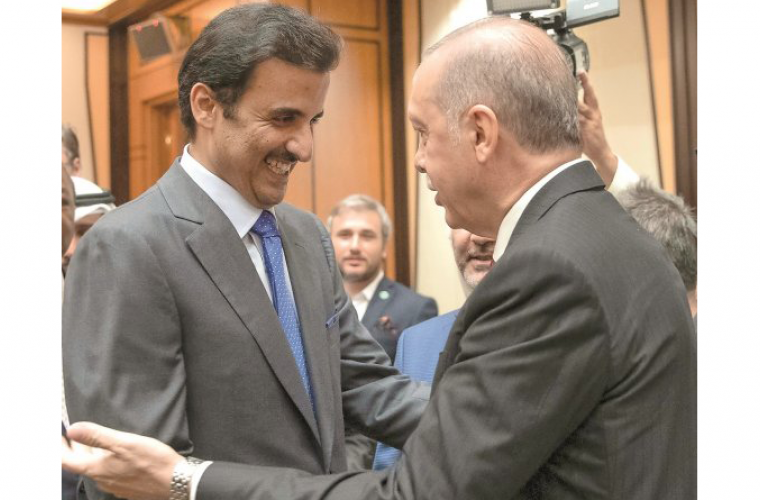 Erdogan took the oath in the capital Ankara, at the Grand National Assembly, chaired by Acting Parliament Speaker Durmus Yilmaz. Erdogan’s re-election at the June 24 polls marked Turkey’s transition to an executive presidential system of government, doing away with the prime minister’s post, among other changes.

Earlier on his arrival in Ankara, H H the Emir was welcomed at Esenboga International Airport by Turkey’s Minister of Youth and Sports Osman Askin Bak and Qatar’s Ambassador to Turkey Salem bin Mubarak Al Shafi along with members of the Qatari Embassy in Ankara.

Erdogan won an absolute majority in the presidential election with 52.5 percent of the vote. Crowds cheered Erdogan along his convoy’s route as he made his way to the inauguration ceremony. The presidency tweeted with the hashtag #NewEraWithErdogan. A special one lira coin (less than 25 US cents) was minted for guests with the image of the presidential palace, dated July 9, 2018.

“As president, I swear upon my honour and integrity, before the great Turkish nation and history, to work with all my power to protect and exalt the glory and honour of the Republic of Turkey,” Erdogan told parliament as he took the oath of office.

Erdogan referred to the principles of Mustafa Kemal Ataturk, the founder of the modern Turkish Republic. He vowed to “remain loyal to the rule of law, to the democratic and secular republic, and to Ataturk’s principles and reforms”.

Speaking to journalists after the ceremony, Erdogan said: “Everything was good in front of the nation, I hope it will be better in the future.”

He wrote: “Our nation, which has deemed me worthy as their first president, has also determined their lawmakers.

“As the 12th president [of the nation] and the first president of the presidential system, I once more vow to strengthen the unity and brotherhood of our nation, develop the country, and elevate the state.

“We are determined to meet the goals of our republic, which are entrusted to our future generations by Your Excellency and your comrades, on its 100th year of founding.”