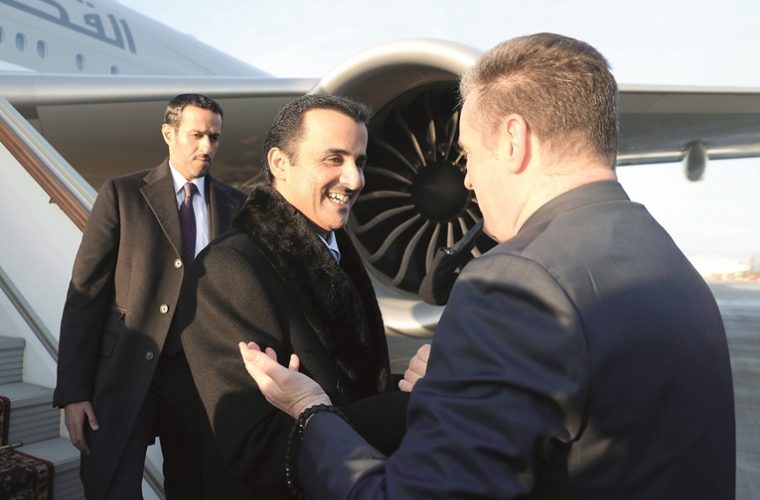 The visit of Emir H H Sheikh Tamim bin Hamad Al Thani to Russia will open new horizons of cooperation and strategic partnership between the State of Qatar and the Russia, said Ambassador of Qatar to Russia, Fahad bin Mohammed Al Attiyah.

“It is the first visit of a leader to Moscow after the victory of Russian President Vladimir Putin for a new presidential term. The visit also emphasizes the strength of Qatari-Russian relations,” the Ambassador said.

He added that the visit will provide opportunity to both leaders to exchange views and ideas on various crises and regional issues “especially the Palestinian and the Syrian issue” and the ongoing war in Yemen and all areas of conflict in the Middle East.

“There are aspirations from both countries to increase investment and trade and economic cooperation,” he said, adding that Qatar has all the infrastructure to enable Russian products to reach Doha through the country’s ports and airports with ease, QNA has reported.

Al Attiyah also said that there is great ambition and horizons to deepen the ties between the two countries. He said that this visit will be followed by many meetings between businessmen from both countries. “Moreover, many administrative and legal procedures will be overcome in order to facilitate the movement of bilateral trade between the two countries by this visit of H H the Emir.”

On the Russian experience of organising mega sports events especially that Russia is set to organize, World Cup 2018, Al Attiyah said that countries share their experiences. “We are in contact with officials in Moscow. A Qatari team will be present before the start of the World Cup 2018 to exchange experiences. This is a natural cooperation between the countries in hosting such events.”

The Ambassador said that the Qatari-Russian relations have grown steadily in recent years in all economic, cultural, military and security fields.

The Ambassador noted that in 2018, the Qatari-Russian Year of Culture, economic agreements, trade deals and mutual investments between the two countries will develop further.

Meanwhile, Russian Federation Ambassador to Qatar Nurmakhamad Kholov confirmed yesterday that his country is a trusted partner to the State of Qatar, both in terms of bilateral and international cooperation.

The ambassador added that the relations are witnessing a significant and increasing development in all political, economic, trade, humanitarian and scientific fields.

Commenting on the visit of Emir H H Sheikh Tamim bin Hamad Al Thani to Russia to Qatar News Agency (QNA), the ambassador said that bilateral cooperation has improved dramatically and now both parties are keen to elevate their partnership even more in all levels.

He added that there is a close interaction between the organizing committees Russia-2018 and Qatar-2022 World Cups.

“We are pleased with the fruitful cooperation with our Qatari partners through national football unions, sharing our experience in the field of ensuring the safety of sport events, as well as in the training of athletes and the development of sport medicine,” the ambassador said.

He said there is constant communication between the leaders of both states and foreign and defense ministries, as well as the work of the Joint Intergovernmental Commission on Trade, Economic, Scientific and Technical Cooperation. “This reflects the progress in various fields adding, the standing partnership between both parties are on the right track.”

The ambassador said HH the Emir’s visit to Russia in 2018, and the meeting held with HE President of Russia Vladimir Putin, gave a strong push to the development of bilateral relations and created regular communication between Deputy Prime Minister and Foreign Minister HE Sheikh Mohammed bin Abdulrahman Al Thani and Russian Foreign Minister Sergey Lavrov. “This communication is held to coordinate on regional issues and to achieve peace and stability in the world, which reflects the compatibility of visions and the exchange views on regional and international issues of common concern.”

The ambassador highlighted that both countries have increased visits, where Deputy Prime Minister and Minister of State for Defense Affairs HE Dr. Khalid bin Mohammed Al Attiyah visited Russia, in response to an invitation from the Russian counterpart. In addition to the State of Qatar’s participation in military-technical exhibition “Army”, which took place in October 2017, Russian Defense Minister Sergei Shoygu also held an official visit to Qatar, during which an agreement on military-technical cooperation was signed.

The Ambassador says, the year 2018 is the Year of Culture between Russia and Qatar, which will provide an opportunity to not only intensify humanitarian cooperation, but will also increase the flow of tourists to both countries, strengthening economic ties, and opening new opportunities for cooperation in new directions. (Source)