Education Above All Foundation’s moving exhibition lands at HIA 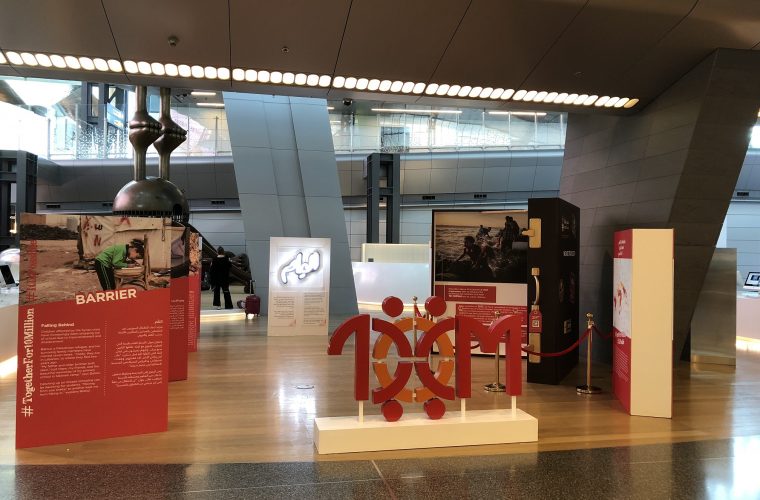 Education Above All (EAA) Foundation’s (EAA) moving exhibition “Reaching 10 Million Out of School Children” has landed at Hamad International Airport (HIA). The exhibit marks the achievement of securing commitments to enrol 10 million out of school children in 50 countries around the world. The exhibition is taking place in the departure’s terminal Concourse C, at Hamad International Airport (HIA) until the 23rd of September 2018.

The traveling exhibit previously held at Qatar Academy and the W Hotel Doha, showcases the barriers to education that more than 63 million children around the world face, and highlights the work EAA and its partners are doing to overcome these barriers.

“Bringing this exhibition to Hamad International Airport, a leading, global transportation hub, helps us to reach and engage with people from different walks of life simultaneously. Everyone has a role to play in the global education crisis, and we want the millions of passengers passing through the airport during this time, to help us raise awareness, learn about the different barriers to education the world’s children are facing and become advocates for the protection of education during times of conflict and insecurity.”

The latest instalment of the exhibition focuses on the support for refugee and displaced children. The world today is confronted with a refugee crisis, with 68.5 million people having been forcibly displaced from home. Since EAA was founded in 2012, it has committed to enrolling more than 1.9 million out of school children and refugee and internally displaced people (IDP) children in 18 countries, partnering with UNHCR, UNICEF USA, UNRWA, UNESCO, IRC, NRC, and Save the Children.

The exhibition allows visitors to experience the journey of refugee children, highlighting the significant challenges they face on route and when accessing quality primary education after being uprooted from their homes, families, friends and communities.

“The work of EAC has shown that change is possible on a large scale. We will change the lives of 10 million children; we have already changed the lives of more than 6.8 million, including 1.3 million refugees and IDPs. Education is a long-term investment in our societies and supporting it is in the interests of every nation. Education drives progress on issues across the Sustainable Development agenda such as tackling poverty, backing zero hunger, improving health and wellbeing, shielding gender equality, encouraging economic growth, and fostering peace. Some may say this was an ambitious target, but working with our partners all over the world, we have shown that large scale change is possible.”

“Even though this a huge achievement, the work is not finished. With more than 63 million children still out of school, there is a responsibility on all of us to ensure every child has access to quality primary education, we can all make a difference in our own way.”

“We are proud to partner with EAA to host the ‘Reaching 10 Million Out of School Children’ travelling exhibition at the airport. With an average of 8,700 passengers per hour passing through HIA, the airport is a prime platform for engaging local and international communities and encouraging them to actively learn more about this program. We all hold a responsibility to raise awareness around the valuable work and outreach for young children struggling to access primary education. Education is a powerful instrument that can empower out of school children worldwide and greatly improves their quality of life. We congratulate EAA on their achievement in enrolling 10 million out of school children worldwide and look forward to working together again in the future.”