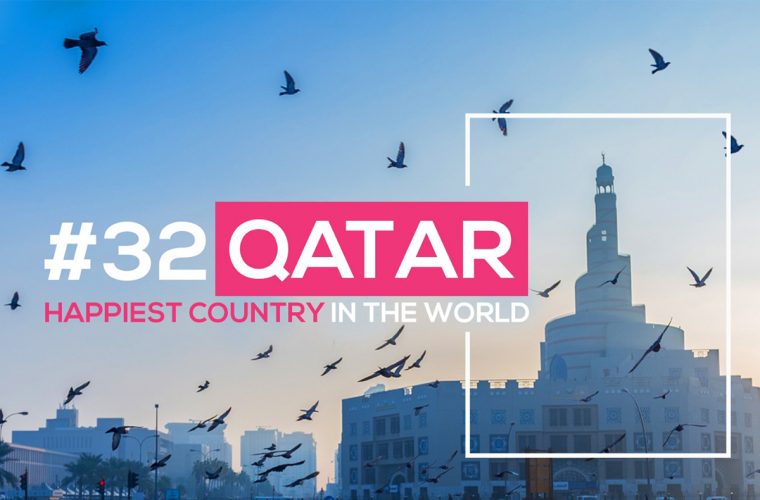 From 35th last year, Qatar has been ranked 32nd happiest country in the world in the World Happiness Report 2018 released by Sustainable Development Solutions Network (SDSN) -- a United Nations (UN) global initiative. In 2016, Qatar was placed at the 36th position, making the jump 4 slots higher from 2 years ago. The leap also made Qatar the second happiest country in the Middle East and North Africa (MENA) region.

Different variables including income, social support, healthy life expectancy at birth, freedom to make life choices, and generosity are counted for the happiness rankings. Migration within and between countries is the main focus of this year's report -- which saw Finland as the new titleholder. Joining the Northern European country in the Top 5 are Switzerland, Norway, Iceland, and last year's Top 1 Denmark.

All the top countries tend to have high values for all six of the key variables that have been found to support well-being: income, healthy life expectancy, social support, freedom, trust and generosity. Also, the 2018 happiness list proved that the countries with the happiest immigrants are not the richest countries, but instead the countries with a more balanced set of social and institutional supports for better lives.

In Qatar, besides the above-mentioned key variables, several other factors testify to why it is indeed one of the happiest countries to live in! One Facebook user by the name of Onika Bhuiyan even commented: "Words are less to explain why Qatar is so loved by its residents!"

With that, here are twelve reasons why Qatar ultimately deserves the huge leap or if possible, a spot in the Top 10 in SDSN's next editions of the World Happiness Report.

Just a disclaimer: While a number of the entries on this list are the writer's brainchild, some (which I've indicated and fully credited) are personal accounts from netizens who answered a survey on Facebook to why Qatar is a happy place to live in.

So shall we roll?

1. A safe haven for expatriates

Qatar houses more than 180 nationalities and with the recent VISA relief that many foreigners are enjoying as part of Qatar's tourism strategy, expatriates are more than happy to call Qatar their second home. The law and order being implemented in the whole country is deemed super efficient as going out late at night regardless of gender is also a breeze as you'll be able to travel from Point A to B without any risk. Driving on highways may be on another side of the story but according to Facebook user Rosma Zishan, she always feels her kids are completely sound when going to school. She continued: "No school gun shooting and no kidnappers on the road. I love Qatar!"

2. Great weather for most of the year!

Residents can't stress enough how pleasant the weather in Qatar is especially once the winter curtains start blanketing the whole peninsula. Surrounded by mostly desert landscapes, climate in the country is relatively hot during the summer but extremely lovable once the calendar enters the Ber months. A Facebook user under the name of Begley Derek commented: "As a Canadian, my hometown is -25 degree Celsius today while I just left the pool here in Qatar." Another user even stressed her fondness for many of Qatar's gorgeous beaches: "I love swimming in the Gulf!"

3. An ideal place for hardcore foodies!

Some of best replies we received from the survey range from "the freshest Khoubous can be found here" to "the fish really comes from the sea" and we couldn't agree more! With recently-concluded food events such as the Chocolate, Tea and Coffee Festival and Biryani Festival and now the Qatar International Food Festival (QIFF) dominating Doha for the first quarter of 2018, there's no question to the fact that Qatar is literally a cloud nine for avid food fans alike! A Facebok user under the name of Zainab Rizvi mentioned: "I love the cafeterias here where we can just drive by and buy the the super sweet Karak tea!" Do we need to say more?

4. Sports is second to none!

This has been written countless times and we can't stress it enough: Qatar is one of the very few countries in the world to dedicate a national holiday just for sports. The effort that the government has put in to make Qatar the sports capital of the world even earned it the most coveted honor of hosting the upcoming 2022 FIFA World Cup -- the first Gulf country to do so. And just like food, sports bring people together especially in a time when a decent number of state-of-the-art sport stadiums are mushrooming across the country for the upcoming big event.

Last January 2017, the Business Insider revealed the 16 Countries with the best Healthcare Systems in the World and Qatar is placed at rank 15th -- in between Canada and France. The website writes: "The best standards of health in the Middle East can be found in the wealthy nation of Qatar. The nation has recently taken steps to implement a universal healthcare system across the entire country." Another Facebook user, Zainab Rizvi, backed the accolade by pinpointing the subsidized and efficient healthcare provided by Qatar's primary health centers.

6. Almost anything is accessible with a tap!

"Here, everything comes with an app, so it’s convenient for everyone," a Facebook user under the name of JC N Adam commented. Qatar may not be on the list of the Top 10 most digitally-savvy countries in the World, but the peninsula is trying its best to become more technologically-advanced to keep up with its residents' swift-evolving mindsets. Urban Point, a locally-made discount app, is one great example. It has Buy One Take One promotions, as well as Ramadan offers! The app's great selection on dining, wellness, beauty & health, fun & leisure, hotels, etc makes it an absolute must-have!

7. Qatar is your gateway to the world!

If you're a budding traveler who's looking for a base point to circumnavigate the globe, then you're in the right country! Try locating Qatar in the world map and you'll see that we are basically situated at the very center which means your wanderlust soul is just a heartbeat away from the vast continents of Europe and Africa, not to mention our neighboring Asian and Eurasian countries. The Qatar Tourism Authority last September called Qatar the Most Open Country in the Gulf Region and after nearly 6 months, they were never wrong! And did we mention that Qatar Airways announced recently 16 additional destinations for their customers to fly to soon? There's literally no stopping the world's number one airline from doing the impossible!

Sal Lavallo, one of the youngest Americans to visit every country in the world, was asked to share his fondest memory of Qatar and this is what he said: "There's a lot of art museums!" From the world-renowned Museum of Islamic Art, the National Museum, to the privately-owned Sheikh Faisal Bin Qassim Al Thani Museum, one day of excursion in the city of Doha alone is never enough to marvel over its vast history and rich culture.

With expats deciding to settle in Qatar for good as their source of income is here, it's a common thing to see several of foreign couples bearing children in a country which they call a "cradle for all ages." Another Facebook user, Sally Bruce, commented: "Qatar is very safe for children. I love seeing kids from all backgrounds playing in malls and parks without any prejudice. I don't mind seeing my little one grow up to a full-pledged man here in Qatar."

The cost of living in the country might have skyrocketed to a relatively unimaginable degree in the last 2 years but it is still worth-noting that Qatar has one of the highest quality of life in the world as it remains to be one of the Gulf countries where residents enjoy tax-free salaries. Thanks to its oil and natural gas deposits, Qatar's multinational workforce population is likely to save their salaries all for themselves in the next few years to come.

Another reason why Qatar is consistently on the happy side is because everyone's keen on showing their love and support for the HH Sheikh Emir even before the Saudi-led blockade was imposed. Despite all the allegations being thrown against Qatar, locals and residents have stayed loyal to Emir's words, making him a symbol of hope -- his portrait is even scattered all over the country! Zainab Rizvi, a Facebook user, commented: "I love how grand government projects like the Qatar National Library start sprouting in the country. This just proves that the Emir really cares for its people."

Lastly, as an expat, I've noticed that family get-togethers are highly-valued in this part of the world. This observation gave birth to another thinking that maybe, the reason why public parks in Doha are multiplying is because the government wants to accommodate more families who prefer spending their Fridays and Saturdays outdoors.

The Peninsula reported that among 156 countries ranked in the report; Finland, Denmark, Norway, Iceland, New Zealand, Australia, Canada, Sweden, Switzerland, and Mexico are respectively the top ten happiest countries in the world while Malawi, Haiti, Liberia, Syria, Rwanda, Yemen, Tanzania, South Sudan, Central African Republic and Burundi have been ranked at the end of the ranking index.

To put it simply, Qatar is happy because the people chose to be that way. It's a choice.

Do you agree that Qatar is one of the safest and happiest place in the world? If your answer is yes, can you add more entries to our list? Comment them down below and also, don't forget to like and share this article -- it keeps us going!