Director of Qatar National Library and the Japanese ambassador 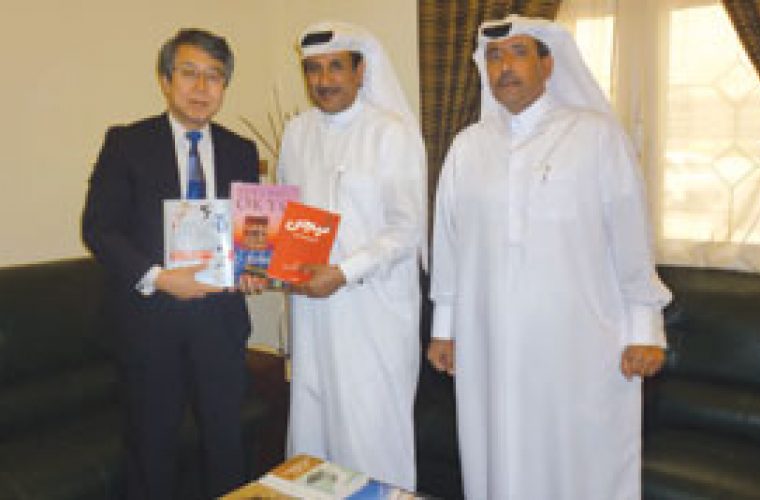 Japanese ambassador Kenjiro Monji has handed over Japanese books to Abdulla al-Ansari, director of Qatar National Library, and HE Sheikh Saoud bin Abdulrahman al-Thani, secretary general of the Qatar Olympic Committee last week. Monji exchanged views with HE Sheikh Saoud on further co-operation between Japan and Qatar in the sports field. On this occasion, the ambassador donated eight Japanese martial art books to the Qatar Olympic Committee. HE Sheikh Saoud expressed his gratitude for this donation and his wish for further co-operation with the embassy.The ambassador met Abdulla al-Ansari at Qatar National Library and donated 25 Japan-related books. The donation from the Embassy of Japan to Qatar National Library is the 19th donation since 1987 bringing the total number of donated books to 795. The ambassador wished to maintain and strengthen the good relations between the embassy and the library. Since 2012 is the 40th anniversary of establishment of Japan and Qatar diplomatic ties, Monji and al-Ansari discussed the possibility of Japan’s participation in the Doha International Book Fair as a guest of honour in 2012.The donated books were originally sent from Japan to display at the Japan booth set up by the Embassy of Japan and the Japan Foundation during the 21st Doha International Book Fair in 2010.This year the embassy has donated a total of 321 Japan-related books to various educational and cultural organisations in Doha including Qatar University Library, Museum of Islamic Art, Qatar Eastern Language Center, Japanese Club of Qatar University, VCUQ-Virginia Commonwealth University in Qatar, Qatar National Library and Qatar Olympic Committee.