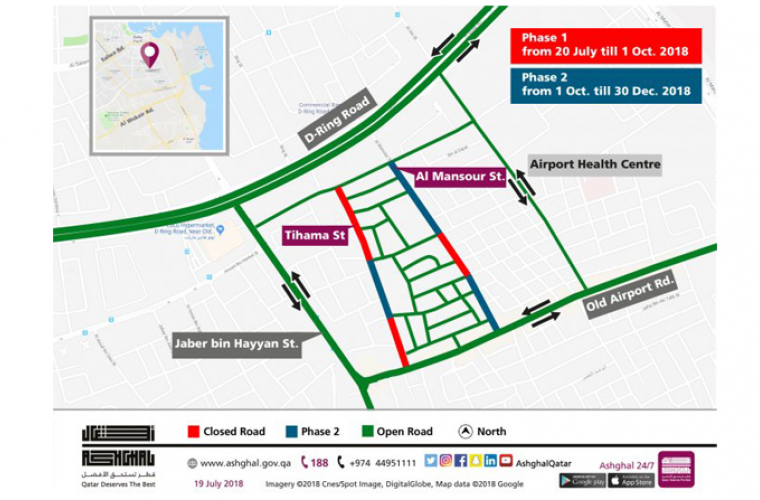 As part of a series of projects implemented by the Public Works Authority (Ashghal) to improve the roads network across the country, Ashghal started the development works on Tihama Street and Al Mansour Street in the Old Airport (Area 45).

Eng. Mohammed Arqoub Al Khaldi, Head of Doha City Section at the Roads Projects Department at Ashghal, said that the works include developing the area’s infrastructure, such as developing the main drainage networks and connecting homes to this network, constructing permanent stormwater and groundwater networks, constructing a wastewater treatment network, and protecting the underground utility lines for Ooredoo and Kahramaa. Works also include providing pedestrian paths and new parking bays, as well as constructing an additional roundabout on Al Mansour Street to enhance the traffic flow.

In order to implement the development works, Ashghal will close parts of Tihama and Al Mansour Streets in both directions.

The closure will be implemented in two phases to reduce traffic disruption. Phase 1 starts today, and lasts until October 1, 2018, followed by phase 2 which will last until end of December 2018. Traffic will be diverted to nearby local roads, and access to houses and surrounding streets will be provided during this period.

It should be noted that the Public Works Authority has completed, over the past two years, the development of a number of streets in the Old Airport to convert them into permanent streets, including Al Hurriya, Al Ameen, Al Salah, Al Tabarani, Al Karama, Al Hussain bin Ali Streets, and parts of Al Mansour Street.

The Public Works Authority will install road signs advising motorists of the closure. Ashghal requests all road users to abide by the speed limit, and follow the road signs to ensure their safety.