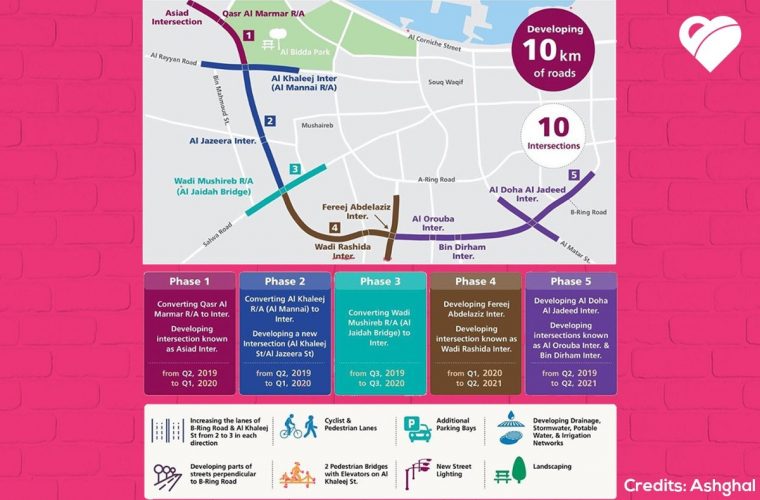 As part of its efforts to enhance traffic flow and ease congestion in the centre of Doha, the Public Works Authority 'Ashghal' commenced implementation of the B-Ring Road Development project, where work is currently underway to implement parts of the first four phases of the project.

The project aims to develop the B-Ring Road and Al Khaleej Street, with a total length of 10 km, and enhance their capacity by increasing the number of lanes on each of them from two to three lanes in each direction. This is in addition to developing Onaiza Street, and parts of the street perpendicular to the B-Ring Road such as Al Matar, Wadi Mushireb, Rawdat Al Khail, and Al Rayyan streets. The project also includes developing the entrance to Rumailah Hospital.

The project also includes providing several elements that will increase the traffic safety in the area, such as providing two pedestrian bridges with elevators on Al Khaleej Street, as well as cycle and pedestrian lanes, road signs and road markings, and new street lighting. The number of parking bays will be increased, in addition to landscaping works.

The B-Ring Road Development Project also includes the development of Infrastructure services in the area such as upgrading the storm water drainage system to avoid water accumulation during the rainy season, and developing the existing potable water, irrigation, and drainage networks.

In order to reduce the impact of construction works on the area's residents and visitors, all closures and diversions are designed to maintain all entrances to residential areas and commercial establishments open to traffic during the project implementation period, in addition to maintaining two open lanes in each direction on the B-Ring Road in case of implementing any traffic diversion.

Ashghal will also implement a number of measures to reduce noise from construction works, such as using special equipment that produce less noise and regularly maintained, in addition to implementing excavation works during certain hours of the day to minimise inconvenience for area's residents, and using water tanks to spray water during excavation works to control the resulting dust.

Head of Doha City Projects in Ashghal's Roads Projects Department, Eng. Mohammed Arqoub Al-Khaldi said that this project is one of the most important road projects being implemented by Ashghal; it includes developing the B-Ring Road and Al Khaleej Street which are characterised by their heavy traffic movement as they connect traffic to and from vital areas such as Msheireb, Al Muntazah, Al Corniche, Al Sadd and Bin Mahmoud. The B-Ring Road also connects many commercial and services facilities such as Rumailah Hospital, in addition to touristic destinations such as Qatar National Museum, Museum of Islamic Art, Souq Waqif, Al Badaa Park and others.