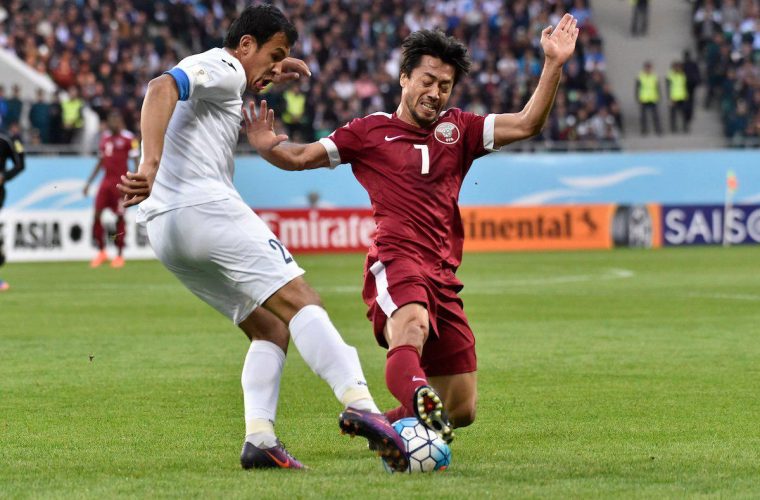 In five years’ time, Qatar will become the first Middle Eastern country to host the Football World Cup: Qatar 2022. The national team qualify for the tournament, for the first time, automatically as hosts.

The Qatar Football Association (QFA) had hoped that next year’s Russia 2018 tournament would see the national side make their début at the world’s most prestigious football tournament. The prestige of qualifying on merit alone was to show the world that Qatar was home to a credible football side, and more than just the home of gas wealth, tall buildings, and great shopping!

‘The chips were stacked against Qatar from the start…’

It was not to be. The national side will make their World Cup début in Qatar, not Russia. Two short weeks ago, a 1-0 away defeat to Uzbekistan left Qatar bottom of their six-team final qualification group with seven games played, just four points gained, and now mathematically incapable of qualification.

The two most pressing questions now are: how did we get here, and where do the national side go from here?

The 2018 qualification chips were stacked against Qatar from the start of the final group. They had waltzed through the first qualification group with seven wins and a draw, scoring 29 goals. But due to FIFA rankings they entered the final World Cup qualifying group of six as ‘fifth seeds’, meaning that there was little expectation, other than within QFA and the Qatari public, that they would finish the group in either of the top two qualification spots for Russia.

The second group comprised Iran (the best side in the AFC), South Korea (nine appearances at the World Cup, including a semi-final), Uzbekistan (the notoriously tough-to-beat Central Asians), Syria, Qatar and China.

The bottom line is that we are where we are because Qatar simply haven’t shown enough to make an impact in a group filled with really good sides. On a one-off basis, the inferior side can get a result against the better side; it happens every week in leagues all over the world. In a ten-game qualification series? Not so much.

(Photo: ...and out: Uzbekistan captain Odil Ahmedov (right) scores the solitary goal in Tashkent which ended The Maroons bid for Russia 2018 qualification)

So, what next? It’s a statement of the obvious, but Qatar need to improve. If they are struggling to get out of their qualification group, it doesn’t bode well for the side in 2022 to be pitched straight in at the deep end against the world’s best. It might not look so good if the team’s performances detract from the show that Qatar wants to deliver to the world.

You can be assured that the QFA is as aware of the above as anyone.

However, the immediate future presents an opportunity in terms of the three remaining qualification games. The results of these games are now meaningless for Qatar, so perhaps manager Jorge Fossati can experiment with differing formations and tactics, blooding younger players on the up, and using other players on the fringes of the squad? Perhaps now is the time to give others a chance to pull on the shirt?

Longer term, a variety of commentators both domestic and foreign have had their say on how to turn Qatar into genuine contenders. Many have pointed to the example of Iceland who, in the space of five years, jumped from 112th in the FIFA rankings to 20th and to the quarter-finals of EURO2016. If someone were to suggest that a QFA delegation should be on the plane to Reykjavik tomorrow for a lengthy meeting with Icelandic FA then who would dissuade them?

Others have pointed to the fact that Qatar’s stars of the future are waiting patiently at the Aspire Academy. The time to give them their chance in the first team has surely arrived.

It has also been suggested that the fact that every member (bar one – Akram Afif) of the Qatar squad plays their league football in Qatar. This is something of a double-edged sword. While it gives Fossati the opportunity to observe and work with his players on a near-constant basis, there is an argument that loan deals to European, North African, or even the Saudi Leagues would be of benefit. Only by playing against better players will Qatar’s players improve, and the football calendar makes this a realistic possibility.

Generally, I find myself in the camp that holds that the buck begins and ends with the manager. For that reason, I think that a cohesive argument could be made for bringing in an assistant to Mr Fossati. While the current boss has experience, he’s not worked at the very highest level before and so the idea of a joint manager doesn’t seem outrageous, someone to work alongside Fossati who has a history of winning honours. Such men are rare, and do not come cheap, but the QFA can afford to make such an appointment, and with 2022 edging ever closer, it’s something they definitely need to consider.

What are your thoughts on Qatar’s road to 2022? Drop us a line in the comments below and tell us your thoughts. Also, don’t forget to give us a like and a share – it keeps us going!