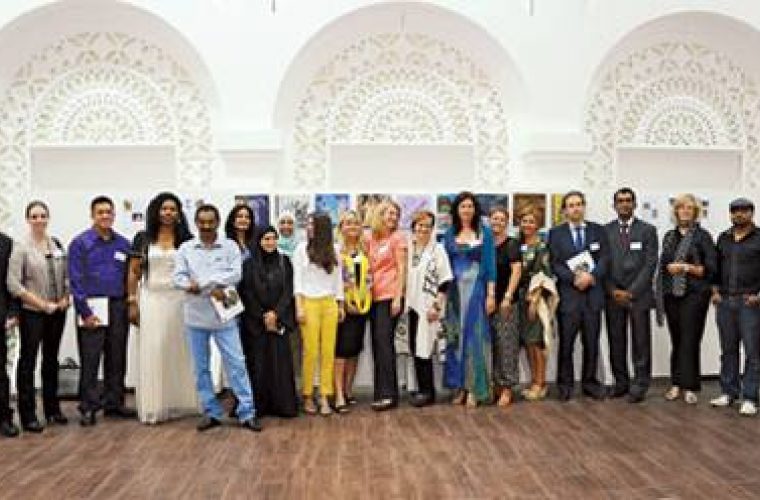 A diverse collection of contemporary works of art was unveiled on Wednesday at the opening of the third annual exhibition of International Artists Doha (IAD) titled ‘Between Cultures’. “With 22 artists from 13 countries, we can truly call this an exhibition ‘between cultures’,” said co-founder and chair of IAD, Marjolijn Stolk, at the launch of the four-day exhibition at the Al AaQool Atrium at Qatar Foundation Recreation Centre in Education City. Hosted and sponsored by Qatar Foundation, the exhibition showcases the latest works of Doha-based artists from Qatar, The Netherlands, Germany, Croatia, Australia, India, Egypt, Iran, Barbados, Portugal, Sudan, The United Kingdom and the Philippines. “The strength of our group lies on the diversity of the members from various backgrounds sharing ideas using art as a common language,” said Stolk, adding IAD members share knowledge and experience through workshops conducted regularly. The works on display offer every art enthusiast a view of wide-ranging styles and subjects used by the artists. Indian painter Salim Abdulla, who started painting at a tender age and began taking interest in photography eight years ago, bases his paintings on images he captures through his camera. “Photography forms an essential component of my paintings because some of the photos become an inspiration that I later take on to canvas,” he said. Using dots, Australian artist Pip Hoy creates beautiful and symbolic paintings based on common sights, and one of his works on display resembles the colourful and riotous bougainvillea. “My other work is a collage which takes the form of beautiful Arabic writing, and the design is well-known in Turkey and other parts of North Africa; this is my modern take on the evil eye,” she explained. In addition to original works on display, all artists have contributed a 30cm x 30cm piece which will be offered to the public through a silent auction, proceeds of which will go to IAD to fund its future public events. One of the interesting works on auction was Arnel Sarmiento’s ‘Striver’, which pays homage to hard-working labourers here. “Striver means hard worker, which represents third country nationals who are not compensated enough despite their effort,” explained Sarmiento, a Filipino civil engineer who has been in Doha for only a year and had earlier been working in the US since the 90s. Other artists taking part in the exhibition include Annette Wendling-Willeke, Urvashi Chauhan, Mohammed Al Atiq, Nourelhadi Awad, Mahgoub Al Magboul, Dominika Bozic, Shihar Hamza, Behnaz Larsen, Willemien Mansell, Doerte Meichsner, Jameela Al Shraim, Nigel Muter, Beverley Ross, Hannelore Seckel, Verity Watkins, Pedro Boaventura and Sylvia Gomes. The exhibition is open today, from 12 noon to 6pm and tomorrow from 10am to 4pm. see more : Qatar Chronicle