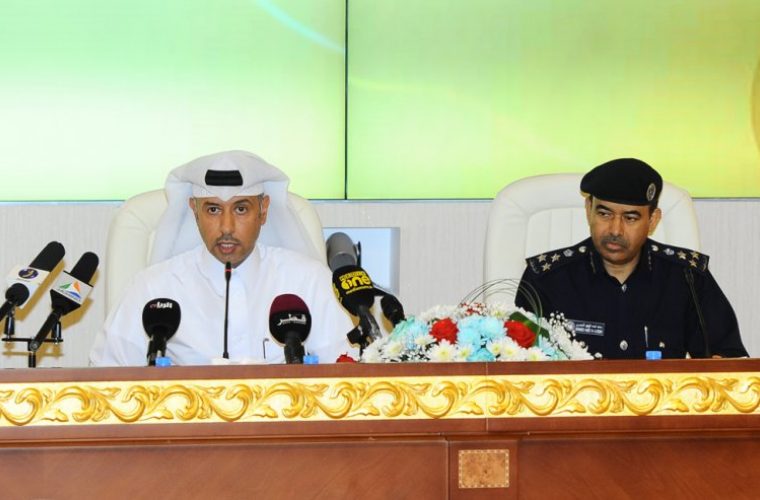 The Ministry of Interior (MoI) and the Ministry of Administrative Development, Labor and Social Affairs (MADLSA) held a joint press conference today to explain Law No. 13 of 2018 amending some provisions of Law No. (21) for the year 2015 concerning the regulation of entry, exit and residence of the expatriates.

The minister clarified that the amended law guarantees the right of the expatriate workers that come under the provisions of the Labor Law to leave the country temporarily or on final exit, without requiring the consent of the employer. He pointed that Employer can specify 5% his employees who need pre-approval before leaving the country due to the nature of work of that employee.

Concerning the implementation of Law No. 13 of 2018, Brigadier Al-Ateeq said that that joint committees have been formed between the MOI and MADLSA to find mechanisms to simplify the procedures for implementing the law. He said that the current situation requires more awareness campaigns in partnership with the Qatar Chamber to clarify the law.

List of the 5% employees whom the employer specifies as requires prior approval from the employer will be placed in the system of the Ministry of Interior.

At the same time, an expatriate worker, who is not allowed to exit the country for any reason, can approach the Expatriate Exit Grievances Committee, he noted. The committee shall decide on his grievances within three working days, the Minister added.

Procedures will be announced in consultation with the Ministry of Interior, so that employers may submit a list of employees who need pre-approval before leaving the country due to their nature of work not exceeding 5% total workforce of the Company.

He added that the Law No. (13) for the year 2018 amending certain provisions of Law No. (21) for the year 2015 concerning the regulation of entry, exit and residence of expatriates, complements the previous legislations issued to protect workers' rights and provide them a safe work environment.

These measures started with wage protection system (WPS) through which all employees get their salaries through the banks, he said adding that, there is a separate department in the Ministry of Administrative Development, Labour and Social Affairs that monitors wage protection system and the necessary measures are taken in case of any delay in payment of wages of workers.

“The Department of Labor Relations at the MADLSA receives the workers complaints. The Department considers the complaints filed within one week of submitting it and coordinates with the employer to reach an amicable solution,” the Minister noted. In the absence of such a solution, the complaint will be referred to the Labour Disputes Settlement Committee, which was recently established at MADLSA, he said pointing out that these committees are headed by judges of the Supreme Judicial Council along with expert members from the Ministry. The complaints are reviewed and settled within a maximum period of three weeks.

“The advantages of these committees are that they decide on cases quickly so that the worker does not remain in a permanent dispute with the employer, giving each person the right, and also helps the worker who proves the right to the subject of the complaint in obtaining another job or leave the country if so desired”, he added. Al Nuaimi also mentioned about the draft law of the ‘Workers' Support and Insurance Fund’ which was approved by the Cabinet at its twenty-second ordinary meeting on Wednesday 5/9/2018 after it was approved by Shura Council. He pointed out that the process of completing the procedures for issuing the law is being carried out to be presented to the Amir.

He added that one of the benefits of the Fund is that if the Labor Disputes Settlement Committee issues its decision on the eligibility of a worker in his complaint filed against the company or the employer, and the latter is unable to meet the worker's due because of his financial incapacity or the bankruptcy of the company, the Fund shall pay the worker's dues and secure his departure from the country. The Fund then will collect what it has paid, from the employer to be added to the Fund's resources.

“This new legislation has become a catalyst for the country, which has led labor-exporting countries to choose it as a country that encourages work and guarantees all rights to workers. This reflects in the quality of work and increases production to benefit the employer”, he said.

He said that the ministry is carrying out awareness campaigns in cooperation with the Qatar Chamber to clarify the mechanism of submitting the complaint by the employers in case the employee refuses to carry out the work assigned to him or he incites the rest of the workers, works with other companies and other matters that violate the work contract agreed upon.

The recent legislation has won international praise, starting with the International Labor Organization (ILO), International Confederation of Trade Unions (ICTU), Union of Construction and Timber Workers, and the Union of Transport Workers as well as other Trade Unions and International Human Rights Organizations. “This praise underscores Qatar's interest in protecting the rights of workers and the achievements of the State in providing workers with a safe environment for work, which is a pride for all of us”, he said.

Regarding the date of implementation, the Minister stressed that the second article of the law stipulates that the law is to be implemented on the day following its publication in the Official Gazette. He pointed out that during the period leading up to the implementation, the two ministries in coordination and cooperation with Qatar Chamber will conduct awareness workshops for employers to clarify all required procedures and mechanisms to implement this amendment.

In response to a question about the mechanism under which the Labor Support and Insurance Fund will work, the Minister said that the most important functions of the Fund is to pay the dues of any worker who is stranded because the employer cannot pay these dues because of his bankruptcy. “At the same, that the fund will establish playgrounds and entertainment facilities for workers in specified areas”, he added. He also pointed that the resources of the Fund will consist of the amount allocated by the State as well as proceeds from Fund's investments.