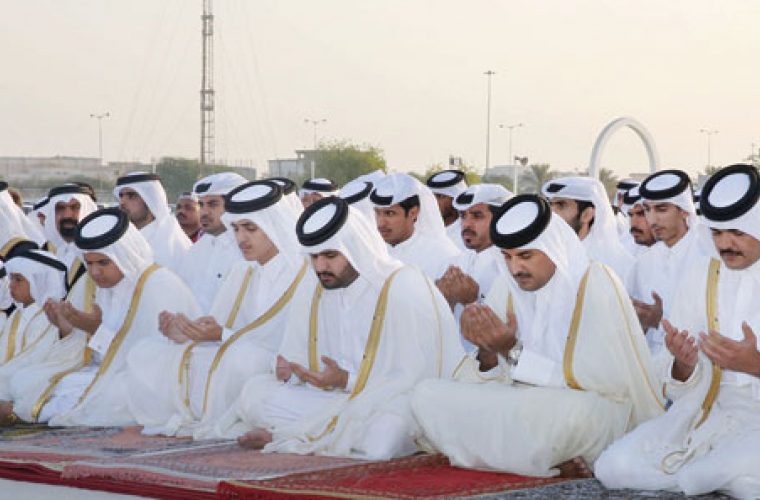 housands of faithful yesterday gathered at nearly 300 mosques and prayer grounds across the country for the early morning prayers at 5.42am, marking the start of the four-day Eid Al Adha celebrations.

The historic Eid Prayer Ground located at Msheireb Downtown Doha, which opened to the public after many years, saw hundreds of people including members of various expatriate communities.

Festive mood could be felt all over Qatar as people thronged popular venues to spend the first day of Eid with relatives and friends sharing with them the spirit of the joyous occasion.

The malls pulsated with life as performers presented colourful shows as part of the ‘Eid Celebrations in Qatar’ programme organised by Qatar Tourism Authority. City Centre Doha, Lagoona, Hyatt Plaza, Landmark, The Mall and Al Khor Mall offered shows and activities many of which have been brought to Qatar for the first time.

Hundreds of people also headed to Katara to witness the Big Bang show capped by a 15-minute spectacular fireworks display, something that was missed by many last Eid Al Fitr when Katara cancelled all its events in solidarity with the Palestinians suffering in Gaza.

More people are expected to throng to the Cultural Village starting today as ‘Dreams On Ice’ circus and acrobatic show opens. In addition the educational and entertaining ‘Angry Birds’ exhibition will soon open adjacent to the circus show venue.

The West End Park and Al Khor Sports Club saw hundreds in attendance for ‘Eid Al Adha Fest 2014’, an entertainment and cultural event for expatriates organised by the Ministry of Interior.

Restaurants and cafés in Souq Waqif were also filled with customers yesterday and more visitors are expected in the most popular souq in Doha starting today as a number of shows begin, including Cinderella, circus and games starting at 5pm. Sout Al Rayyan’s music festival will also start its six-day nightly concerts starting at 9pm tonight, featuring some of the finest singers in the region.

The Corniche and parks were also filled with many visitors who enjoyed meeting friends on the first day of a long break from work.

More than usual police were seen deployed at places frequented by people while traffic police personnel were also stationed at major intersections in the city to ensure smooth flow of traffic.

Meanwhile, many passengers complained of taxi drivers cashing in on the Eid holidays and demanding more than the regular fare.