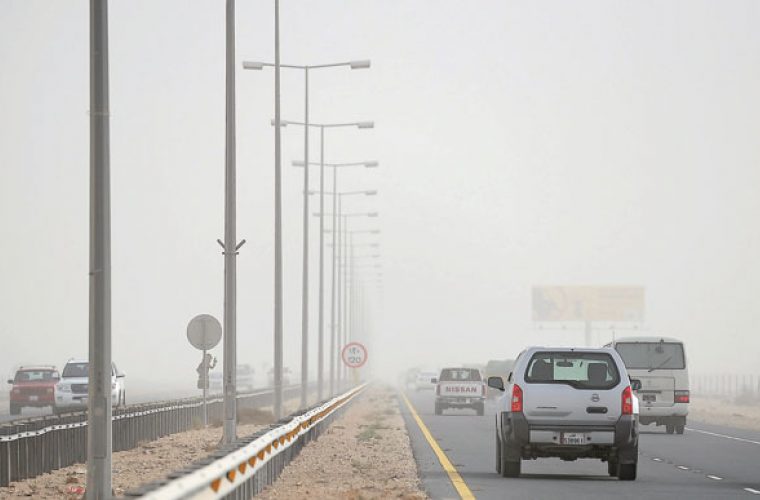 The cold spell that hit the country yesterday is expected to continue today causing a further fall in temperatures.

Strong winds, dust, fog and low visibility caused motorists experience difficulties and some minor accidents were reported due to the low visibility.

Strong northwesterly winds affecting the whole country associated with a cold front is causing a decrease in temperatures.

Visibility was about 1km due to dust and wind blowing at a speed between 15 and 25 knots, reaching 30 knots inshore. It was between 18 and 30 knots offshore and reached 38 knots at times.

“Around 6.30am, the D Ring Road was hardly seen due to fog, and it was almost the same around noon with thick dust,” said a motorist.

Around 8.30pm, a motorist driving from Aziziya to Doha said, “It’s much cold outside compared to other days, not dusty like it was during the day, but the wind is strong. Thick fog was experienced early morning and strong dusty winds hit the country in the afternoon.

The harsh weather change has forced the organisers to postpone the Sixth Qatar International Falcons and Hunting Festival.

The sudden weather change is attributed to an extension of high pressure from the northwest of Saudi Arabia. The maximum temperature was between 16 degrees and 20 degrees Celsius and the minimum between 10 and 14 in Doha.

The meteorology department has warned of high seas with strong winds and advised people to be cautious, especially while driving. Temperature in Doha for today is forecast between 13 and 23 degrees, while places like Mesaieed and Al Wakra will experience between 10 and 21 degrees. the peninsula

Temperature is also expected to be less than 8 Celsius over the southern area of the country, especially in Abu Samra. The wind during the day is expected to be northwesterly reaching 22 knots and decreasing to less than 10 knots by night.

“With the existence of a cold air mass in upper air levels it is expected that some low and medium clouds will form with a slight chance of light rain in the area,” it said.

This will lead to an increase in sea wave to about six feet to 10 feet which will gradually increase between 10 feet to 14 feet today.