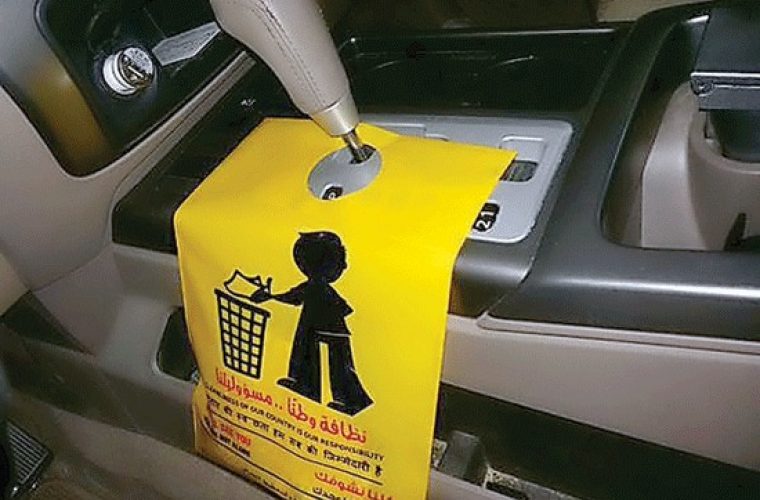 Drivers on Doha roads will soon get plastic bags from authorities to keep garbage while driving. The bags are distributed as part of the ‘We All See You’ campaign, by the Ministry of Municipality and Urban Planning (MMUP).

MMUP on its official Twitter account posted a picture of a yellow bag with a graphic of a bin and a slogan as ‘Cleanness of our country is our responsibility.’ Also in a separate post MMUP reminded residents to take picture of any violation such as throwing trash on the roads and send it via the ‘Baladiya’ app. ‘We see you, you are not alone’ campaign was launched by the ministry in March 2014, with an aim to encourage people to take responsibility in keeping the public places clean.

Displaying billboards on main roads, the logo of the campaign is a sketch of a child who embodies prohibited behaviours such as throwing garbage on the beach and spitting on pavements or other public places. The picture is accompanied by slogans such as ‘We see you’, ‘You are not alone’, ‘Don’t spit on Public Properties’, and ‘Don’t throw garbage on the beach’.

Earlier reports said that leaving waste or garbage bags close to houses in the open will get a fine of QR100, and improper disposal of animal waste outside of the assigned containers QR400 to QR500. If anyone is caught spitting on the sidewalks or roads or public places, the person will be charged a fine of QR200 fine.

Legal measures will be taken against the violators if they refuse to pay the fine. Offenders can be imprisoned for a month and fined between QR500 and QR10,000 after they are produced to the public prosecutor.