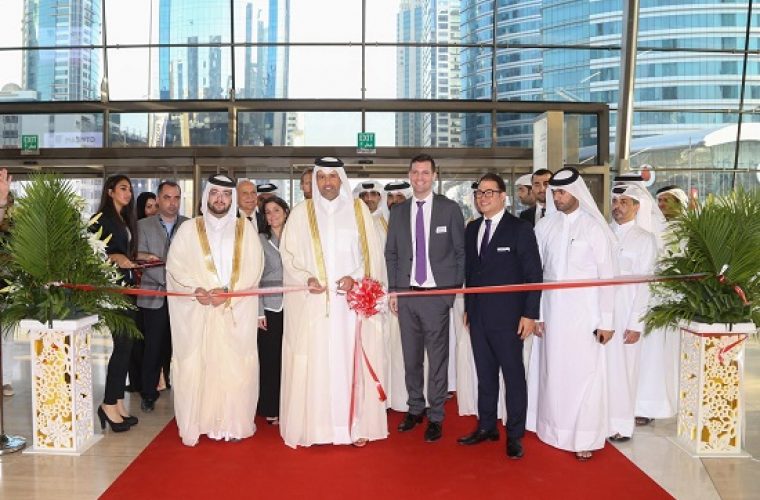 In a statement during the inauguration of Cityscape Qatar 2016, His Excellency Sheikh Ahmed bin Jassim bin Mohammad Al Thani, Minister of Economy and Commerce confirmed that Qatar’s direction towards diversifying its economy is a main driver of the real estate sector in the country.

His Excellency added that the real estate market in Qatar is witnessing a prosperous period resulted by the country moving forward with its infrastructure developmental projects as part of Qatar National Vision 2030 and World Cup 2022.

The real estate market is also influenced by many other sectors including investment, construction, and tourism. By inaugurating Cityscape Qatar 2016, the Ministry of Economy and Commerce reaffirms its commitment towards supporting the real estate sector in Qatar, as one of the main drivers of the country’s economy.

After the inauguration, His Excellency Sheikh Ahmed bin Jassim bin Mohammad Al Thani also toured the exhibition visiting a number of stands, with real estate companies showcasing their latest developments from Qatar and around the world.

Meanwhile, the latest Qatar Market Outlook report which was released by DTZ and discussed at length during the Cityscape Qatar Market Overview, examined the role of real estate in achieving Qatar’s long term goals. Led by DTZ General Manager, Edd Brookes, according to the Real Estate Market Overview, for the first time in the last number of years, supply is out-stripping demand implying that there is value available for shrewd investors making it a buyers’ market.

Cityscape Qatar 2016 has brought together a number of leading local exhibitors including Just Real Estate (JRE), the event’s Platinum Sponsor, Al Bandary Real Estate, Ezdan Holding and United Development Company (UDC), who are also showcasing a number of residential properties which will be released into the market throughout 2016. These include, JRE’s architecturally impressive tower, THE e18hteen.

The luxury commercial office tower located at Marina Commercial District in Lusail City, will offer approximately 36 floors of office space with full amenities, including retail outlets and an Executive Club and is positioned to attract both local businesses and international corporations alike.

Speaking on the occasion, Mr. Nasser Al Ansari, Chairman of JRE, said: “JRE represents the next generation of real estate management and aims to become a leading player in the real estate sector in Qatar and the region, delivering international high standard solutions for developers and investors. Collectively, my team and I have over 50 years’ experience in real estate development and investment. Going forward, we will focus on offering our customers affordable luxury solutions while delivering commercial success to our clients and investors,” he added.

In addition, with Qatar’s population expected to continue growing throughout 2016, the findings from the Qatar Market Outlook report also suggest that the country is about to enter a period of strong growth in retail supply with a number of new retail malls nearing completion. This mirrors the trend in recent years during which Qatar benefitted from strong growth in retail trade which was driven by an increasing population with high disposable income. A slew of new malls are expected to open in Qatar within the next 12-24 months including Mall of Qatar, Doha Mall, Doha Festival City along with Place Vendome, with strong occupancy rates expected.

Ezdan will be exhibiting their latest retail offering, Ezdan Mall Wakrah, regarded as one of the most prominent models of architectural and urban development of malls in Qatar. Based on innovation and creativity, Ezdan Mall Wakrah is a true example of traditional Arabic architecture with modern themed environment. Upon completion the mall will showcase general merchandise, full-line department stores, fashion, apparel stores, food court, cafes, restaurants, theme park and a renowned regional supermarket brand.

Moreover, this growing retail trend has been witnessed across the country, particularly in Lusail City, as well as on The Pearl, Qatar, with Medina Centrale currently experiencing a period of tenant fit-outs, with the majority of retail units now open for business. This is also reflected in Porto Arabia which has also seen an increase in activity with a number of new arrivals on the retail promenade in recent months.

Cityscape Qatar is the only international real estate event in the country that brings together industry stakeholders such as investors, developers, government officials and home buyers. This year’s exhibition features 90 exhibitors – a 10% increase compared with previous years.

The leading local exhibitors, which also include Gold Bay Real Estate and John Taylor, will be joined by regional and international heavyweights including, Tilal Real Estate, KGR Real Estate and Cluttons from the UAE, Chestertons, St. James and Taylor Wimpey from the UK, Kuwait Project Management and Kingdom Real Estate from Kuwait, along with the Turkish companies, Gap İnşaat Yatırım ve Dış Ticaret A.Ş. Nova Property and Yusuf Ozkan, among many others. As well as showcasing their projects, all exhibitors will engage in in-depth analysis and discussions around current real estate and investment trends.

Ali Sarp Kaya, CEO of BICC Invest, a Turkish Exhibitor, said: “This is the first time that we are participating in Cityscape Qatar, and we decided to do so as we have a number of GCC clients that we work with and we are looking to expand our services in the region. So far we have had a really positive experience, which will encourage us to continue participating in Cityscape worldwide.

Ahmed Zakaria, Exhibition Director, speaking on behalf of the organiser, said: “Cityscape Qatar is thrilled to be in Qatar for the fifth year in a row, as we remain committed to supporting and promoting the country’s real estate sector. The Qatar real estate landscape continues to expand and we look forward to witnessing growth across the board, but in particular with regard to residential and retail sectors. This is an exciting time for investors, and Cityscape Qatar is proud to have a number of exceptional investment opportunities to showcase during this year’s event.”

Cityscape Qatar is open from 1 PM to 10 PM daily, showcases real estate development opportunities and the diversity of projects, and is expected to attract more than 7,000 visitors over the coming three days.

To find out more about Cityscape Qatar 2016, please visit: www.cityscapeqatar.com