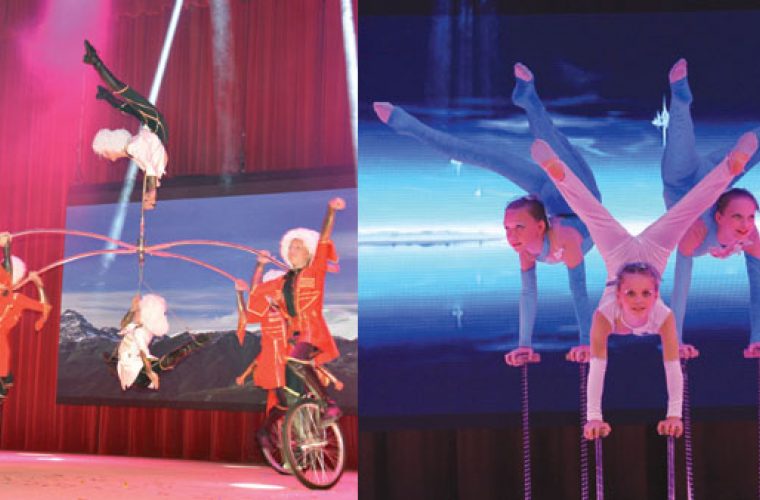 Ukrainian circus performers entertained hundreds of spectators yesterday with their breathtaking acrobatics at the Al Rayyan Theatre in Souq Waqif.

The event is part of the Eid al-Fitr celebrations in the country which will run until August 1.

Entertainment and similar feats will not be complete without the magic show which draws huge attention and focus from almost all the people inside the theatre.

“Wow! How did he do that? That is really amazing!” was the common reaction of spectators as the illusionist continues to perform more
unique tricks.

Clowns and jugglers were also a big hit with their witty and humorous performances on stage.

Besides veteran members of the circus team, popular young performers from Ukraine and Russia also wowed the crowd with their stunts on the bike.

Trained animals were also seen performing to the diktats of their handlers.

Many of those seated on the front had the chance to take photos and videos using their smart phones.

“Circus never fails to captivate us, me, my husband, my son and my daughter, we all love to watch these kind of shows here in Doha,” said a mother while waiting for the second part of the circus. She also lauded the venue for its design, giving every spectator a good view even
from afar.

Another family said that the fee they paid was worth it and would ask some of their colleagues to watch it. Entry fee costs around QR50 and QR100 for VIP tickets.

Souq Waqif has also opened its entertainment tent at the Al Ahmad Field which is adjacent to the Gold Souq.

Some stilt walkers wearing colourful and unique costumes welcome families and other visitors. A photo booth was also set up for those who want to have light moments with them.

Numerous stalls lined up on opposite sides also offer numerous games for kids such as balloon pop, mini-basketball, mini-football, and spin the wheel.

Another attraction was the train which takes its “passengers” for a short trip around the tent and gives time to rest and relax.

In one area, a number of big inflatable playhouses were also set up for kids. These had become popular playgrounds in Qatar especially for similar
celebrations and events.

Hearing about the kids’ shows organised in malls and in other venues, Indian expatriate Sumesh said he cancelled their trip to the UAE and preferred to celebrate Eid in Qatar with his family.

“You also have to consider your budget in going for a trip even if it is just for three days. Anyway, the events here are getting better and better each year,” he noted.

Sumesh plans to take his children to some of the malls to watch the scheduled shows in the evening.

Other activities inside the entertainment area include face painting, toy car race and maze among others.

Souq Waqif, Katara and the Heritage Village have earlier announced that they have scaled down their activities in solidarity with the suffering people in Gaza.