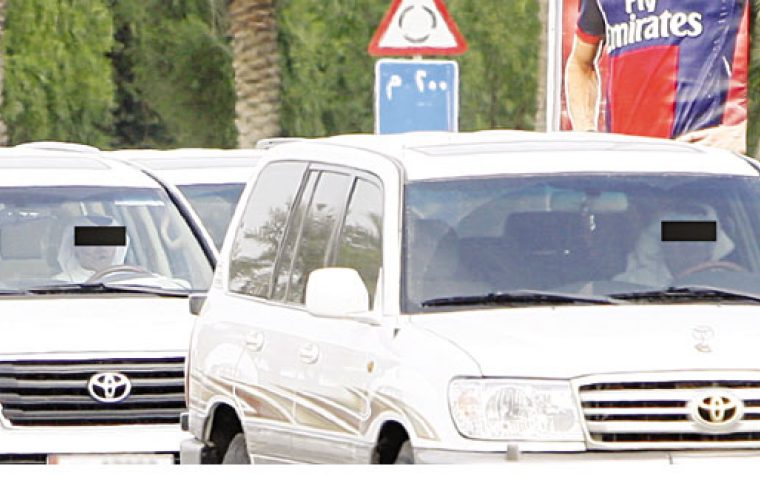 A campaign by the Traffic Department to curb traffic violations does not seem to have had any impact, a second survey by Gulf Times in as many weeks has found. After the first survey, Gulf Times reported last Saturday that traffic violations in Doha had reached alarming levels, making a mockery of the country’s laws. Incidentally, the Traffic Department announced the campaign the very next day. All the findings from last week - that many motorists do not wear seatbelts, use mobile phones while driving and take left or U-turns from lanes meant for proceeding straight - were valid this week too. In order to take stock of the situation, Gulf Times again sent two news photographers to some of the busiest points in Doha. The pictures they took show eight out of 10 motorists using mobile phones while driving and at least five out of 10 not wearing the seatbelt. The photographer who was at the Muntazah Signal on C Ring Road for nearly 30 minutes observed that many truck and bus drivers were not wearing the seatbelt. He also found that illegal left- and U-turns were common. Some motorists even had the audacity to take a U-turn or left turn from the slow lane of the forward lanes. The second photographer, who spent a total of about 75 minutes at three locations - two signals on Airport Road and Hot Bread Bakery roundabout off C Ring Road, also found that the seatbelt and mobile phone restrictions were flouted by a large number of motorists. This was happening although traffic police and even some senior officials of the Traffic Department were seen at roundabouts and traffic signals looking out for violations. “I saw an officer in navy blue uniform on the median at Al Waab Signal on Wednesday. He was noting down vehicle numbers, obviously of those motorists not wearing the seatbelt or using the mobile phone,” a resident told Gulf Times. A safety expert reiterated that not wearing the seatbelt is one of the dumbest mistakes a motorist could make. “If you are not buckled up, even a small impact to your vehicle from a minor collision could propel you forward or sideways, causing injury,” he said. “Similarly, using a handheld mobile phone while driving is a sure recipe for disaster,” the expert warned. Almost all new models of vehicles and mobile phones have built-in Bluetooth capability and motorists must take advantage of the technology, he said. “I feel pity for those motorists who fail to utilise the safety features of their vehicles. The negligence towards safety is not just because of ignorance, it is arrogance too,” he added http://www.gulf-times.com/qatar/178/details/376647/campaign-fails-to-deter-traffic-offenders