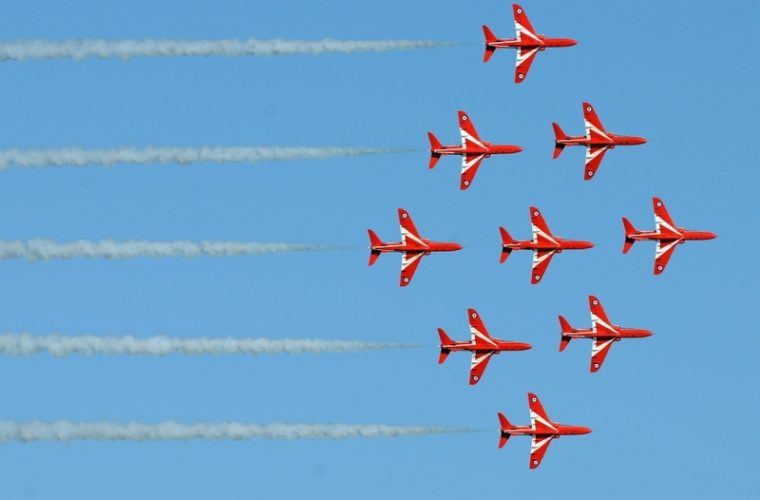 ONE of the world’s premier aerobatic teams, Britain’s famous Red Arrows, is to display in Qatar as part of a Middle East tour. The team, with its nine distinctive red jets, will perform a series of precision formations and dynamic loops and rolls when it visits Doha on Thursday, November 7. It is hoped thousands of people will watch and enjoy the flying display from 1415 from the Doha Corniche (West Bay end). Officially known as the Royal Air Force Aerobatic Team, the Red Arrows represent the United Kingdom and have been thrilling crowds, at home and overseas, since the 1960s. Squadron Leader Jim Turner, Team Leader of the Red Arrows, said: “It is a huge honour and privilege to have been invited to the Middle East and have the opportunity to perform our display in so many wonderful locations. “We take great pride and pleasure in being able to demonstrate our flying in all of these places – some of which we have never visited before, while others we are very pleased to be afforded the opportunity to return to. “Just as countless others have already done in 2013, I hope people in all of the locations we will be flying to will come to the display, watch our aerobatics and enjoy the experience.” The event in Qatar forms part of a five-week tour of the Middle East by the Red Arrows, with the Team also expected to complete displays in Bahrain, Jordan, Kuwait, Oman and the United Arab Emirates. The Team’s visit to the region has come about after accepting an invitation to the Dubai Air Show, where the Red Arrows will perform each day between November 17 and 21. It is an opportunity being used by the Team to visit other nations in an important region, with which the United Kingdom has strong links to. This relationship includes long-held partnerships, across a number of defence interests, industry and wider markets. The Red Arrows are ambassadors for the United Kingdom and showcase the excellence of the Royal Air Force. The team, which currently fly BAE Systems Hawk aircraft, consists of nine display pilots, all of whom are from frontline squadrons. Each has previously operated other Royal Air Force fast jets, such as the Tornado or the Typhoon multi-role combat aircraft. There is also more than 100 support staff in the Red Arrows, including operations and flight planners, engineering technicians, photographers, safety equipment experts, drivers, a public relations department, suppliers and administrators. Next year is the 50th display season for the team which, since formation, has performed more than 4,500 displays in 54 different countries. Acknowledged as one of the world’s premier aerobatic teams, the Red Arrows is an iconic British brand and has often taken part in major events and high-profile occasions, both nationally and internationally. For example, the Team helped signal the start of last year’s Olympic Games in London, with a formation flypast of the stadium and Opening Ceremony. Squadron Leader Turner said: “The Red Arrows showcase the speed, agility and precision of the Royal Air Force. Our flying display includes a combination of a synchronised formation aerobatics during the first half of the performance, followed by a more dynamic second half. “We hope you will see us perform during our time in the Middle East and thank you for hosting the Team and for your support.” Visit www.raf.mod.uk/reds for more information on the Red Arrows. - ILQ News -