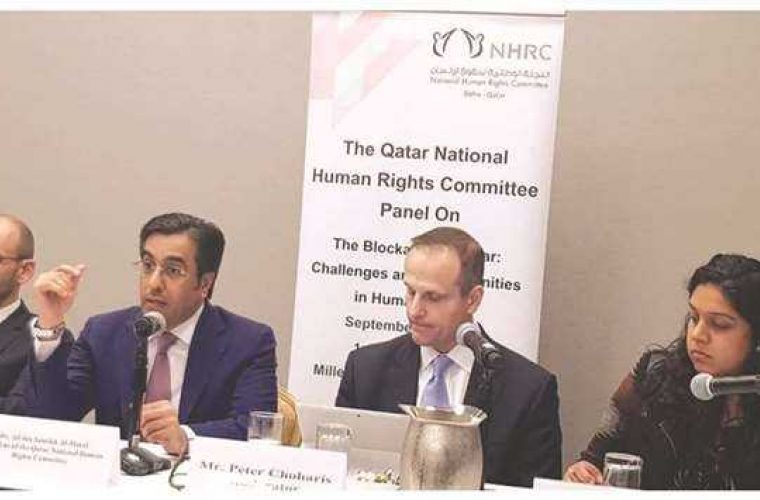 The National Human Rights Committee (NHRC) Chairman His Excellency (H.E.) Dr. Ali bin Samikh Al Marri heavily criticised the blockading countries’ insistence on violating human rights which has completely ignored the deepening struggle of people at a seminar organised in New York yesterday by the NHRC on the challenges and opportunities facing human rights field as a result of the Qatar blockade. He called on the international community, human rights organisations, and international parliaments to exert more pressure on these countries and prevent them from further carrying out their violations.

H.E. Al Marri was speaking in a seminar organised in New York by the NHRC on the challenges and opportunities facing human rights field as a result of the Qatar blockade.

Assistant Professor at Qatar University Dr. Ioannis Konstantinidis was a participant at the talk along with UN Deputy Director at Human Rights Watch Akshaya Kumar. The talk was moderated by Peter Coharis, an American legal expert. A number of representatives of UN international missions, human rights activists, and representatives of international legal organisations were part of this seminar.

He stressed that they were not concerned with cutting diplomatic ties for years, but rather they were concerned with ending the struggles of the entire community of people living in the GCC. During the seminar, the NHRC Chairman gave an overview of the latest consequences and effects of the blockade. He highlighted the violations documented by the Office of the High Commissioner for Human Rights and international human rights organisations, in light of the insistence of the blockading countries to ignore the calls of the international community to stop their violations. He also highlighted the emergence of other types of violations against Qatari citizens in the blockading countries, such as enforced disappearance, arbitrary detention, piracy and espionage

Al Marri strongly condemned the Egyptian authorities’ harassment of Qatari citizens and officials of official Qatari delegations, pointing out that the committee received documented complaints from citizens who were denied entry visas to Egyptian territories. The decision to ban members of official Qatari delegations in the Arab League was also a violation of Arab League agreements. He stressed that the NHRC would move urgently using international mechanisms to stop such violations and obstacles. He added that the Egyptian authorities’ did not just affect Qatari citizens, revealing that the NHRC has recently received numerous complaints from Egyptian residents in Qatar about the harassment they receive at Cairo airport, for no reasons other than being residents of Qatar.

Al Marri meanwhile expressed appreciation of Qatar’s initiative to host an international conference on fighting piracy and espionage. He pointed out that the NHRC was the victim of 735,000 attempts to hack its website.

He also called for the establishment of a UN Special Rapporteur on the crimes of electronic piracy and its impact on the enjoyment of human rights, and also called for placing these crimes on the agenda of the Human Rights Council.

For his part, Konstantinidis said that the blockade imposed on Qatar is a violation of regional laws, noting that the countries of the blockade were communicating clearly that they have no desire to negotiate with Qatar. “All attempts to resolve the crisis failed, because of the position of the blockading countries.”

Kumar meanwhile said that the violations committed by the blockading countries against Qatar are an attack against the freedom and fundamental rights of people, especially when families are separated and children are denied access to their parents or mothers. She pointed out that the reports of human rights organisations and those prepared by the United Nations indicate that the expulsion of Qatari nationals from the countries of the blockade caused the displacement of labour that were working for the citizens of Qatar in those countries, becoming homeless in some instances.

What is your stance on human rights violations against Qatari residents and its citizens? When do you think the blockade will end? Do you think it will end? Do let us know what you think. Like and share the article - it keeps us going!