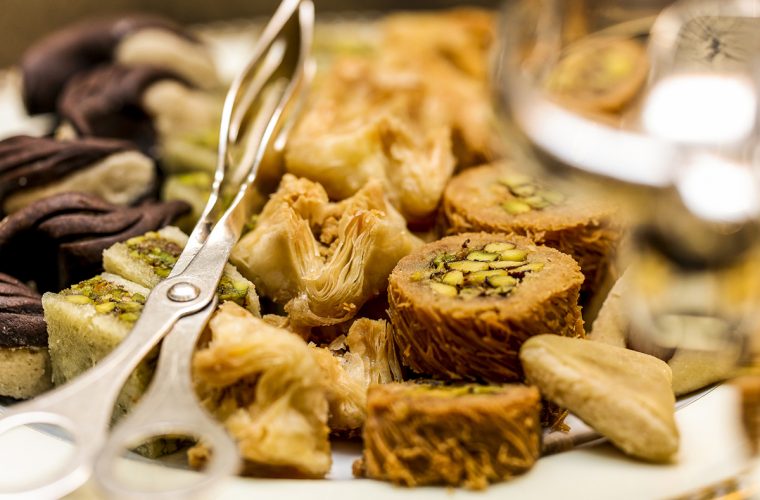 When it comes to the classic ‘sweet tooth’, consumers in Qatar are highly educated in taste and quality - and are very discerning!

Indeed, Arabic sweets are widely regarded all around the world, coming as they do from ancient traditions of Arabic hospitality that have been practised for thousands of years. These delightful delicacies are often so mouth-watering they seduce those who taste them to return to them again and again, and Doha has long been a home to the finest examples and widest ranges of these exquisite Arabian creations to satisfy the sweet tooth.

Here are some of the best Arabic Sweets available in Doha.

Kunafa is undoubtedly the most popular dessert on the list. It is made from cheese and pastry that is then soaked in sweet syrup and finally topped with pistachios. It can be prepared in 3 different forms: khishnah (with a rough exterior), na’ama (which is softer and finer), and muhayra (which is a combination of both rough and soft texture). It is a Lebanese dish whose origins lie during the Ottoman Empire.

Mahalabia is a traditional Arabic dessert in Qatar. It is similar to a milk pudding with thick layers. This sweet dish is prepared using creamy milk, rose water, and cardamom. Also, dry fruits such as nuts and pistachios are added as toppings to enhance the taste. This popular delicacy is served in many variations depending on the vendor.

Bakhlava is a delicious sweet treat, prepared by making layers of pastry and then filling it with chopped nuts. Sweet syrup or honey is then added to hold the pastry layers together. This delicacy is crisp and has a flaky texture and originates from the days of the Ottoman Empire in Turkey. It is also widely available in Central and Southwest Asia and throughout the Mediterranean, especially in Greece and the Greek Islands.

Umm Ali is a very famous Egyptian dessert that is similar to bread pudding familiar to residents of Europe and North America. Considered the sweetest Arabic dessert, this delicacy is prepared by over-drying bread and serving it with toppings of milk, nuts, and raisins. It is a must try if you visit Qatar!

Basboussa, or otherwise known as Hareeseh, and is a popular Middle Eastern sweet dish which looks similar to a cake. It is prepared using cooked semolina that is soaked in either plain syrup or rose water. Popularly, coconut is added to the dish to supplement the taste. Sometimes, nuts (preferably walnuts) are used as toppings to the dish.

Luqaimat is created by deep frying sweet dumplings in sugar syrup. Traditionally, honey is also added to enhance the taste and look of the dish. It is mostly prepared during special occasions such as Ramadan. This dish is similar to the very popular Indian sweet dish Gulab Jamun.

So, which ones are top of your wish list? Please let us know in the comments section and don't forget to like and share this article!