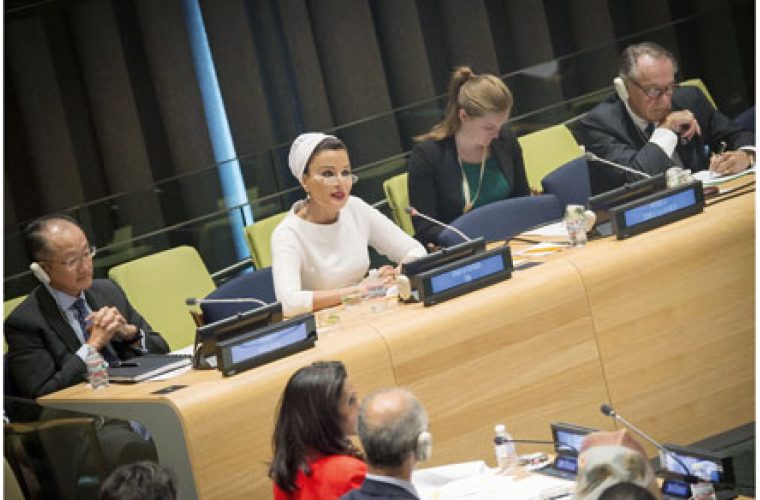 Basic education is not only the responsibility of governments but a universal responsibility, H H Sheikha Moza bint Nasser has said.

The First Lady of the United States, Michelle Obama, welcomed international leaders and global partners of the education forum and delivered a keynote address about the quality of education for girls.

In opening remarks, Sheikha Moza asked the question: “If we have not managed to achieve universal primary education over the last 15 years, what makes us think that we will do so in the next 15 years. As we look ahead to the future development goals, have we really reflected enough on where we have failed? Until we do, we will not reach our goals.”

Sheikha Moza argued that the steps to universal primary education are clear but only achievable if political leaders see the potential in primary education. She also asserted that investments in education yield rapid returns, citing UNESCO estimates that each additional year of schooling raises a country’s annual GDP growth by 0.37 percent.

Sheikha Moza stressed the importance of protecting schools in conflict through strong international legal mechanisms and sanctions against those who attack schools. “I believe that until we have these, we will not meet MDG 2 by 2015, or even by 2030. If we fail to educate children in conflict zones today, we may meet them again later as hopeless adherents of violent ideologies. As we are learning now, the cost of dealing with them later on is billions.”

Sheikha Moza called for the global community to prioritise completing the agenda of universal primary education in the upcoming Sustainable Development Goals, and setting realistic targets towards this. Sheikha Moza highlighted the achievements of ‘Educate A Child’, which in less than two years, has already committed support to 2.5 million children across 33 countries.

In her closing remarks, Sheikha Moza underlined the benefits of building strong alliances with trusted partners.

“We cannot do this alone. Education is a universal goal and a universal responsibility that requires universal solutions.”

The Global Partnership for Education, a key partner, estimates that a $3.5bn injection over the next three years could support the schooling costs of 29 million children. This, coupled with increased domestic commitments and better protection of schools, could achieve the goal of universal primary education in six years, by 2021.

CGI, an initiative of the Clinton Foundation, convenes global leaders to create and implement innovative solutions to the world’s most pressing challenges.

Talks during the meeting dealt with challenges and the progress made over the last 20 years in achieving equality for girls and women across the world and discussed solutions to accelerate progress and strengthen the foundation for women’s equality and societies’ prosperity.