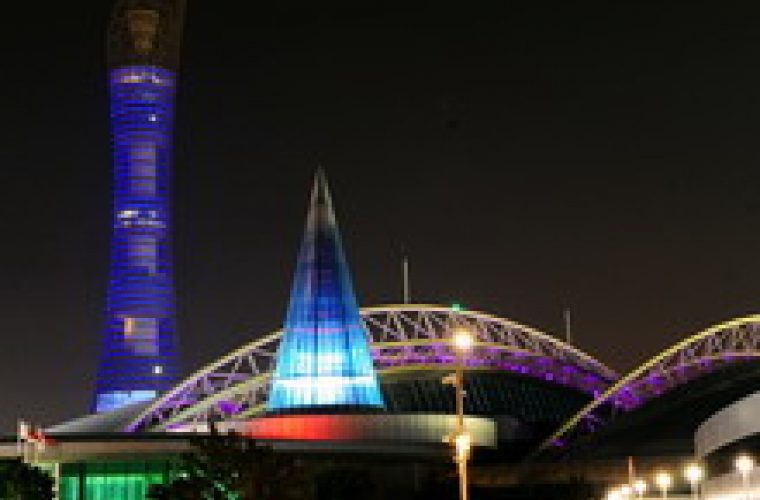 Qatar’s Aspire Dome and Tower yesterday took their places among the 989 registered landmarks world-wide which marked the United Nations World Diabetes Day by lighting up in blue. The event was organised by the Qatar Diabetes Association (QDA) in association with the Aspire Academy for Sports Excellence. About 500 people, including women and children took part in a walkathlon, a community walk covering a distance of 2.5km around the Aspire zone. The walk under the theme change your life… small steps… big rewards was lead by Nada Zeidan. Most of the participants were wearing blue T-shirts to mark the occasion. Several schools and organisations took part in the day’s activities, held in association with the Qatar Diabetes Association. The walk was followed by the spectacular light-up ceremony. This is the second consecutive year the Aspire light-up was carried out to mark the event. Last year, 279 iconic monuments were lit-up in blue as beacons of hope for the millions of people worldwide living with diabetes. The colour blue reflects the sky that unites all nations and is the colour of the United Nations flag. “Our diabetes campaigns are becoming successful,” said Dr Abdulla Al Hamaq, Executive Director, QDA. “The national survey in 1999 showed the prevalence of diabetes to be 15 percent. In the 2008 survey, it is 17 percent. The rate of increase in diabetes is very less. This shows that our campaigns and works has had an impact on the society and is still continuing,” he told The Peninsula. “People are becoming more aware of the activities these days. The turn up for the event was beyond our expectations. Also the people undergoing the diabetes and heart risk assessment at the venue have increased . So our message to the public has not fallen on deaf ears,” he said. At the finish line, family-oriented entertainment including a live band, face painting, clowns and jumping castles were there for the participants. At the same time, exercise and health pavilions at the venue offered fitness checks and blood sugar tests for diabetes. “Our goal is to reach the general public, the educational and health care communities in an effort to target Qataris who are at risk of diabetes and help guide them to the proper medical programmes to prevent or diagnose and treat this deadly disease,” said Gisela Hackfort, ASPIRE Active’s program head. “Diabetes and obesity are the leading problem in Qatar,” said Sharoud A Mattis, Programme Manager, QDA. “They are the leading cause of many other health problems. So our message to the public is to eat healthy, exercise and thus bring a brighter future for the whole nation,” she told The Peninsula. THE PENINSULA