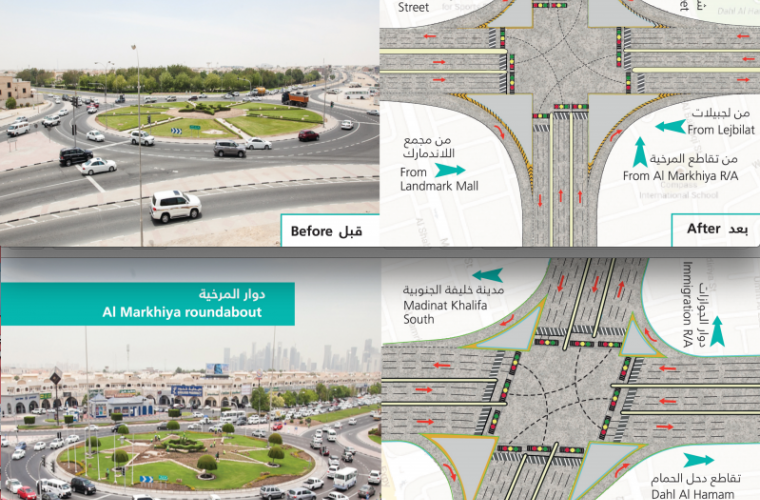 As part of a series of projects to enhance the roads network in Qatar, the Public Works Authority ‘Ashghal’ has announced a project to convert Al Markhiya and Dahl Al Hamam roundabouts to signal-controlled intersections. Construction work on the project is expected to commence in mid-May and completion is estimated by October of this year.

The project is located in a strategic area of Doha, connecting several main roads such as Al Markhiya, the Arab League, Jassim Bin Hamad and Khalifa Streets. Given its vital location, work on this project will be carried out while keeping two lanes open to traffic in each direction throughout the construction period and temporary access will be provided to businesses and residences.

The project will involve converting Dahl Al Hamam roundabout to a signal-controlled intersection and will provide three lanes in each direction on Al Markhiya and the Arab League Streets. Covering a stretch of 400m from the centre of the intersection, the development works will further enhance traffic flow by providing three additional lanes turning left and a dedicated side lane to turn right at each signal. In addition, pedestrian crossings will also be created to ensure safety of road users.

Converting Al Markhiya roundabout to a signal-controlled intersection will involve four lanes in each direction on Khalifa Street, in addition to three lanes to turn left and one lane to turn right. Widening of roads will be done by taking parts of the median to provide enough space for the new signals and their utilities.

The project will involve works in the following areas:

The Authority revealed that as part of this project, a storm water drainage network will be installed and some existing utilities will be enhanced and diverted. This is in addition to landscaping works and installation of street lighting and traffic signals along the new intersections.

The Authority has confirmed that road signs will be installed to advice motorists of alternative routes and has advised all road users to respect traffic rules and abide by speed limits at all times to ensure their safety and safety of others. Work on the two roundabouts will be implemented around the clock in order to finish the project on schedule.

The Public Works Authority has recently completed the conversion of a number of roundabouts on Al Corniche Street to signal-controlled intersections. The converted roundabouts include the Museum of Islamic Art, Al Diwan, Grand Hamad, Al Meena, the National Theatre, Wadi Al Sail, and the Post Office. 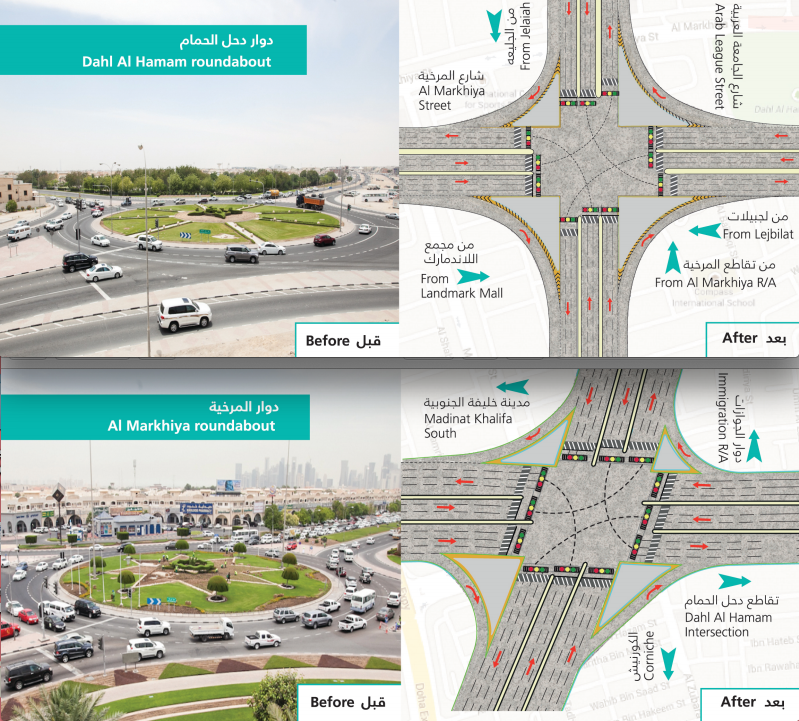