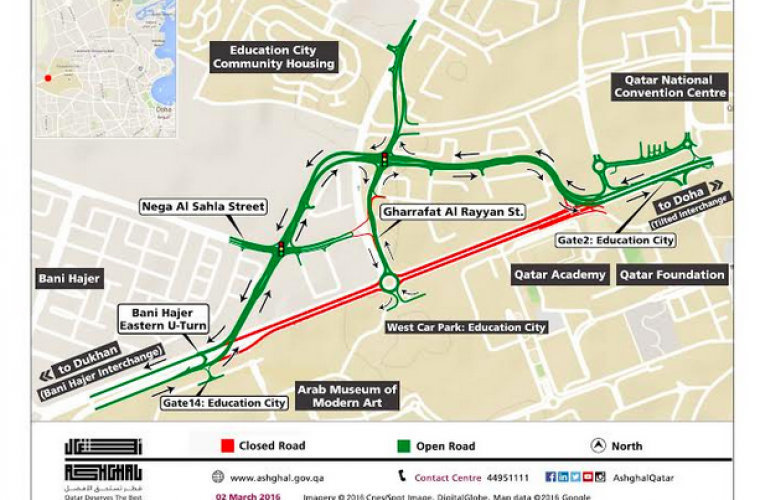 The Public Works Authority ‘Ashghal’ announces that it will implement a temporary closure on part of Al Luqta Street in both directions from Doha to Dukhan and vice versa, for a distance of 1700 metres between the Qatar National Convention Centre and the Arab Museum of Modern Art, as shown in the attached map. The closure, which will be implemented in coordination with the Traffic Department, starts on Friday 4 March 2016, and will last one year and ten months.

During this period, traffic on the closed section of Al Luqta Street will be diverted to Gharrafat Al Rayyan Street and Nega Al Sahla Street, as shown on the attached map. Three entrances for the Education City will be available, which are Gate 2 on Al Luqta Street, Gate 14, and through the car park. Also entrance will be available through Al Huwar Street south of Tilted Roundabout.

This closure is required to facilitate construction works of the proposed Dukhan Road (East Contract), as part of the Dukhan Road East project which includes the construction of a 11 km road with four lanes in each direction, as well as upgrading the service roads including multi-level interchanges, and landscaping.

Ashghal will install road signs advising motorists of the closure. The authority requests all road users to abide by the speed limits, and follow the road signs to ensure their safety.