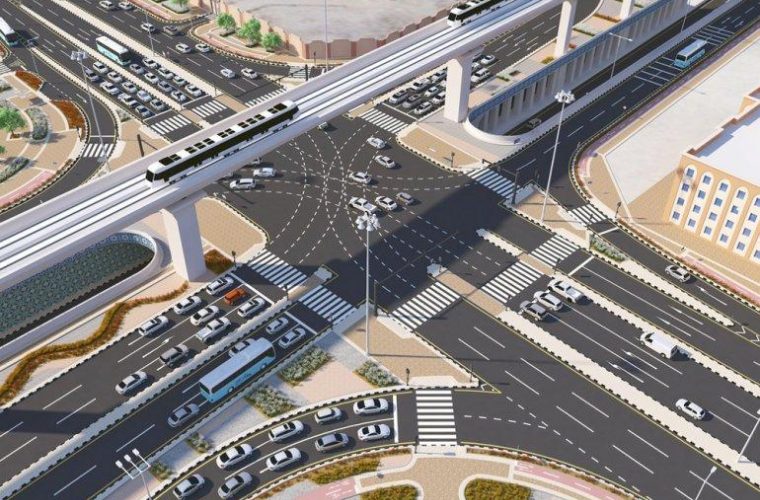 The road project that extends for 9 kilometres comes as part of Ashghal’s plan to complete works on the road network in the southern area of the country, following the recent openings of roads that serve the southern area such as G-Ring Road, Southern Part of Doha Express Highway, Hamad Port Road and the Orbital Road which is coming to a completion.

The road works stretch from the Airport Interchange on G-Ring Road to Mesaieed Road and Waab Behair Intersection in the Southern Part of Doha Express Highway. Works will include widening the road to three lanes to accommodate 6000 vehicles per hour in each direction instead of two lanes to accommodate 4000 vehicles per hour in each direction, providing free traffic flow and reducing travel time for vehicles coming from Doha to Al Wakra and the southern areas as the project will include constructing four new intersections and upgrading the existing roundabouts to signal-controlled intersections. Works also include constructing a tunnel, which provides a free traffic flow in both directions. The project also includes the construction of bicycle and pedestrian paths running for a length of 6.1 kilometers from the airport interchange to the Ras Bufuntas Train Station.

Al Wakra main road creates a strategic link between Doha and Al Wakra, as it is directly connected to G-Ring Road and the Southern Part of Doha Express Highway “Al Wakra Bypass” to Mesaieed Road. Al Wakra Main Road will also be integrated with the Qatar Rail Metro Station in line with developing an efficient transportation network that can improve traffic flow.

Al Wakra Main Road is scheduled to be completed in the second quarter of 2020. The construction works of the project will be achieved in three stages:

The project’s second stage will extend from former Al Wakra Roundabout up until Pearl Roundabout. Road works extend for approximately 1.9 kilometers. The project also includes three lanes in each direction, and a tunnel that extends for about 160 meters and is located under the main Al Wakra Qatar Rail Station.

The project’s third stage starts about 1 km before, known as, Pearl Roundabout and extends up to Woqod Petrol Station located towards the city of Mesaieed. The construction includes the development of the 5.5 km long road from Al Wakra Main Road and converting three main roundabouts: known as, Pearl Roundabout, Ooredoo Roundabout and Wadi Afja Roundabout in Al Jabal area to signal-controlled intersections in addition to the construction of a junction in Al Razi Street.

Al Wakra Main Road serves a large number of neighborhoods, residential and commercial complexes in Al Wakra, Al Wukair, Barwa City and Al Wakra Market. It is one of the key projects in the southern area given that it will ease movement of Al Wakra resident directly towards Doha in the north and to Mesaieed in the south.

Al Wakra Main Road Upgrade is part of the expressway network in Qatar, as it will make a positive impact on the traffic fow in the southern area. The project will also contribute to reducing pressure on existing roads in other areas of Al Wakra; thus, complementing the other axes of the expressway network, of which several parts have been recently opened such as the G-Ring Road and the Southern Part of Doha Express Highway “Al Wakra Bypass”, which is connected to Al Wakra Stadium, one of the stadiums hosting FIFA World Cup 2022.

Ashghal has announced that traffic will be closed for road users going to Doha from Al Meshaf and Al Wukair areas, which will be implemented on Saturday 27 October 2018 and remain until the first quarter of the year 2020.

The proposed closure in coordination with the General Directorate of Traffic to allow the completion of road construction works at the underpass, located at Al Wakra main road.

As shown on the map above, road users will follow the following directions according to their destinations:

Ashghal will install road signs advising motorists of the traffic shift and request all road users to abide by the speed limit, which remains at 50 kph along the route, and follow the road signs to ensure their safety.

Ashghal has reconstructed Al Wukair Road that links the Orbital Road with Hamad Port Road towards Al Wukair Area for a distance of 10.5 km. Ashghal turned the dual one-lane road into a highway with four lanes in each direction to cater for 8000 vehicles per hour.

Doha Expressway includes five multi-level interchanges that will be completed in the next few months. The project also comprises 42 km of pedestrian and cycle paths.

Hamad Port Road is expected to reduce travel time by more than 15% especially that the road capacity is 8000 vehicles per hour in each direction.

Ashghal has opened huge sections of the 195-km long Orbital Road. The new road is considered as an important addition to the road network in Qatar; it will serve as a vital link between the Southern and Northern areas in the country. The project also includes the construction of 21 main interchanges, including tunnels and flyovers that connect the Orbital Highway with the highways and main roads such as the G-Ring Road, Salwa Road, Dukhan Highway, and Al Shamal Road. This will significantly enhance the flow of traffic and shorten the journey times through the Orbital Highway by around 50% on average, compared to the time spent in the same journey using the existing roads.

G-Ring Road is one of the key axis of Qatar's expressway network. Being a highway road that provides an uninterrupted traffic flow, it had a significant positive impact on the traffic movement in the country’s Southern areas. It also contributed to reducing pressure on existing roads in other areas; thus complementing the other axes of the expressway network, of which several parts will be opened to traffic throughout the coming months.

The G-Ring Road extends over 22 kilometres from Hamad International Airport to the Orbital Highway, and includes five lanes in each direction and 48 km of pedestrians and cyclists lanes, surrounded by landscaping. (Source)

How do you feel about this upgrade work? Do you live or work in Al Wakra? Do you think this upgrade work will be beneficial in the long term? Do let us know what you think in our Comments section. Like and share the article - it keeps us going!