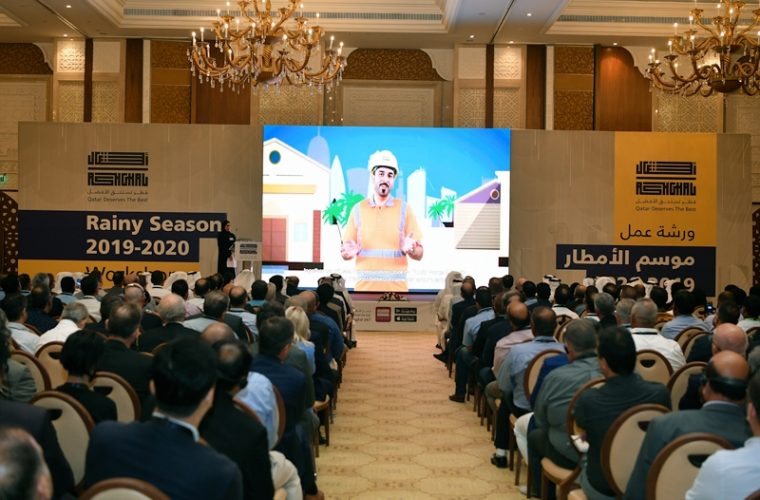 The workshop aimed to highlight the progress update of the latest projects done by Ashghal to eliminate the effects of rainwater accumulations in different parts of the country. It also discussed Ashghal's preparations for the rainy season and briefing all employees and partners on the work plan, whether from contractors or consultants.

The workshop also shed the light on climate change and the increase in rainfall, as well as the proposed solutions to deal with this phenomenon.

During the workshop, participants discussed future and permanent projects to help deal with rainwater, as well as urgent solutions that serve the highways and main roads.

Ashghal’s officials presented the main procedures and processes developed to deal with rainwater during the important upcoming sports events, such as the Gulf Cup and FIFA Club World Cup which will take place in November and December 2019.

Ashghal’s H.E. President instructed contractors and all concerned authority officials to take all the important precautions and measure in order to ensure that highways, main roads, and tunnels are free of rainwater accumulation, putting the road-users safety as the first priority. H.E. stressed the need to implement all drainage projects according to the schedule.

Worth to be mentioned that Ashghal continues to implement infrastructure projects in certain areas according to the development plan, to include drainage networks or temporary operational solutions.

Major projects are progressing to complete permanent systems for the discharge of surface water, such as Mesaimeer Outfall Tunnel Project that aims to discharge surface water and rainwater, in addition to permanent drainage networks in various areas.

This is in addition to 20 completed temporary solutions that help reduce the accumulation of rainwater in most vulnerable areas in Doha to enhance operational readiness. These include the installation of overland pipes with pumps to clear water from the streets and pump it into lagoons away from residential areas. The recently completed solutions include Education City, Umm Ebairiya, Al Wakrah, Al Wukair, Arabian Gulf Street and University Street. These areas were heavily impacted by rainwater accumulation last year.