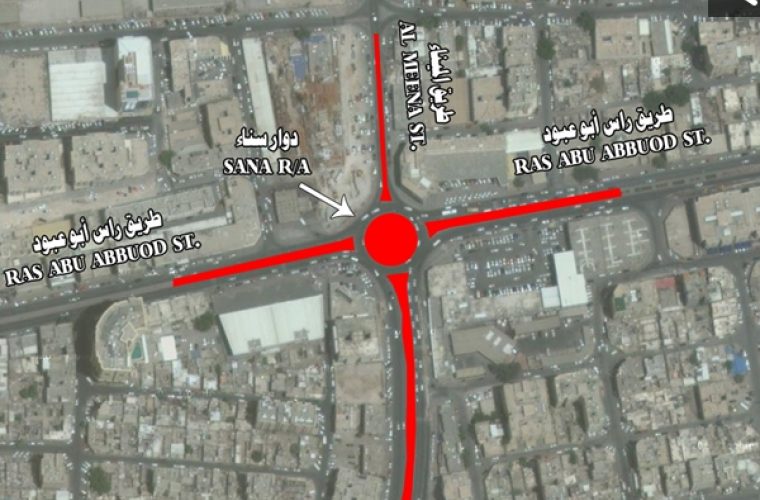 The Public Works Authority (Ashghal) has announced the completion of stage one of Al Rufaa Intersection upgrade works (known as Sana Intersection) and the opening of its signal for traffic after removal of the temporary roundabout.

The second and final stage of upgrading works of Al Rufaa Street is scheduled for the end of this year and will further expand the vehicular capacity of the intersection. It will provide a total of eight lanes for traffic coming from Ras Abu Abboud Street and Ahmed bin Mohamed bin Thani Street including four lanes to continue straight, three lanes to turn left and one lane to turn right.

The upgrade will also include expansion of eastbound lanes of Ras Abu Abboud Street from two to four in addition to a service road to facilitate access to shops and businesses alongside the road. As for traffic coming from Ali bin Omar Al Attiya Street and B-Ring Road, lanes will be expanded to five lanes providing two to continue straight, one to turn left and one shared for both in addition to one lane to turn right.

Eng. Mohamed Arqoub Al Khaldi, Head of Doha City Section, Road Projects Department at Ashghal, said that the upgrade of the intersection and removal of the temporary roundabout, significantly contribute in increasing the intersections vehicular capacity and reducing the congestion.

He also highlighted that the intersection has a strategic location that links some of the major vital roads in Doha such as Ras Abu Abboud Street, Ali bin Omar Al Attiya Street as well Ahmed bin Mohamed bin Thani Street and B-Ring Roads.

He explained that further to enhancing traffic flow in the heart of these dense areas, Al Rufaa Intersection facilitates the commute to several health and educational facilities, commercial centers and many hotels in addition to Hamad International Airport and the iconic Qatar National Museum.