And the Doha film fest winners are… 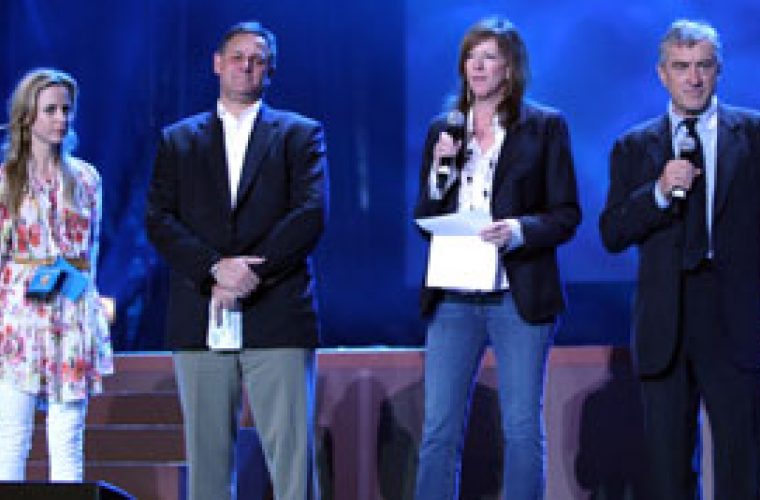 As the curtain fell on the Doha Tribeca Film Festival last night, Oscar-winning actor Robert de Niro was on hand to present awards to three film-makers, declaring his pride at the success of the first instalment of the event. The $50,000 audience award for the best film was presented to Team Qatar, the documentary film of the first Qatari national debating team’s efforts in the World Debating Championships in the US. Director Liz Mermin collected the award, acknowledging the ‘home team advantage’ enjoyed by the film and thanking the festival. Tribeca Film Festival founders Craig Hatkoff, Jane Rosenthal and Robert de Niro (second, third and fourth from left, respectively) on the dais during the closing ceremony of the DTFF last night as executive director Amanda Palmer looks on. PICTURES: Jayaram Another $50,000 award was presented to the makers of Pomegranates and Myrrh which won the audience award for the best Arab film. Accepting the award, director Najwa Najjar said: “Being a Palestinian winning this award in Qatar means so much.” The director was overwhelmed when the award for her first feature film was announced, and she expressed her gratitude to the audience who voted for her, declaring “I love Doha!” Scandar Copti joined de Niro and DTFF executive director, Amanda Palmer on stage to present the award for the best one-minute film, The Racer – a story about racing in Doha and the dangers associated with reckless driving. Sophia al-Maria won the most promising film-maker award for The Racer which was created this summer as part of a DTFF workshop on the craft of film-making. Before presenting the awards, de Niro said: “I cannot express how proud I am. This is only the first year, but based on the past four days, the future of the festival in Doha is bright.” Earlier, de Niro made his first public appearance at the festival as he took part in the screening of one-minute films produced by Qatar-based film-makers in conjunction with the festival. De Niro took to the stage alongside Tribeca’s creative director Geoff Gilmore, film-maker Copti, actress Hiam Abbas and his co-founder of the Tribeca film festival, Jane Rosenthal. Speaking about the films, the world famous actor and director said: “It is really difficult to make a one-minute film – in fact it would be impossible for me!” He expressed his pleasure at being in Doha, before announcing that the festival will be introducing further educational programmes in the new year, including screenwriting and directing labs and a reciprocal relationship with Tribeca in New York which will involve ten students in an exchange programme. Asked to describe the most important thing to keep in mind whilst pursuing a career in film-making, de Niro said: “You only have your individuality – you have to keep that.” “As the process becomes more expensive, more creativity is stripped away, so you have to remember what you really believe in – do something original and something that could only come from you,” he said, adding “courage in your convictions is essential.” Abbas – who stars in Pomegranates and Myrrh - claimed that the word to remember is “truth.” “This is a beautiful word,” she said, arguing that remaining truthful – whatever the kind of film being made – is hugely important in film-making. Everyone associated with the festival said that they were delighted with the past four days, with all the film-makers expressing their excitement for the future of this new partnership. http://gulf-times.com/site/topics/article.asp?cu_no=2&item_no=323824&version=1&template_id=36&parent_id=16