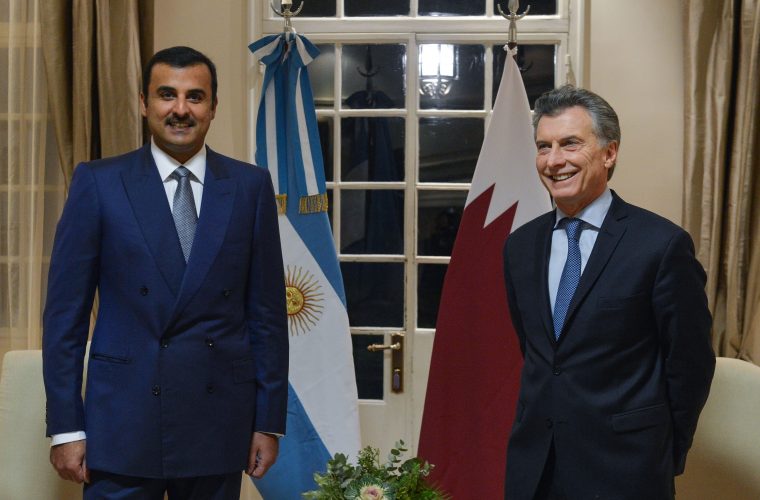 At the beginning of the session, President Macri welcomed His Highness the Amir on his second visit to Argentina, praising the friendly and growing relations between the two countries, hoping that the Amir’s visit will contribute to further co-operation.

On his part, His Highness the Amir reaffirmed what was stated by the Argentinian president in relation to the strong and solid relations between the two countries, adding that the two countries will continue to work for further co-operation in other fields, expressing his confidence that the visit will further enhance that.

The talks focused on means of developing bilateral relations and areas of co-operation in economy, investment and sports, as well as exchanging experiences in education, research, sports, agriculture and environment.

Issues of common concern were also discussed. The talks were attended by members of the official delegation accompanying His Highness the Amir.

From the Argentine side, it was attended by a number of ministers.

His Highness the Amir and the Argentinian President later witnessed the signing of an agreement and memorandums of understanding between the governments of the two countries.

They witnessed the signing of an agreement on the abolition of visa requirements for holders of diplomatic, private and official passports between the two countries; a memorandum of understanding aimed at consolidating and encouraging co-operation in education and science; and a memorandum of understanding between Qatar’s Ministry of Culture and Sports and the General Secretariat of Sport of Argentina to enhance possibilities and opportunities for sports co-operation between the two countries, using the Argentine expertise in this field.

They also witnessed the signing of a memorandum of understanding on the exemption of Qatari nationals from visa; and a memorandum of understanding for co-operation between the Ministry of Municipality and Environment of Qatar and the Ministry of Production and Labour of the Argentine Republic aimed at establishing consultations and co-operation in agriculture, livestock, fisheries and agricultural sectors in the mutual interest of the two countries.

Are you looking forward to a more harmonious relationship between Qatar and Argentina? If yes, drop us a line in the comments and also, don't forget to like and share this article—it keeps us going!