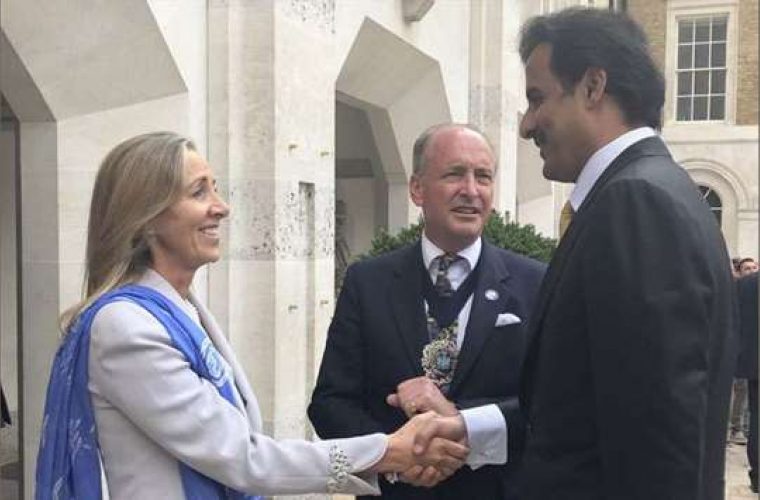 His Highness the Amir Sheikh Tamim bin Hamad al-Thani visited the 'Imperial College London' for sciences, technology, engineering and medicine on Monday, where he was welcomed by UK Minister of State for Health Caroline Dinenage, UK Minister of State for International Development and the Middle East Alistair Burt and Director of the Institute of Global Health Innovation Professor Lord Ara Darzi.

During the visit to the Hamlyn Centre for Robotic Surgery at the college, the Amir was briefed on the features of the centre by senior officials specialised in health care technology, education and training. The Amir was also briefed on the existing cooperation areas in the health sectors of Qatar and UK, especially on the "Qatar Creating Vision" project to fight blindness and eye illnesses for children in developing countries such as India and Bangladesh.

The project was signed in 2015 between Qatar Fund for Development and 'Orbis'.

The Amir was also briefed on the cooperation fields with World Innovation Summit for Health (WISH) which is sponsored by Qatar Foundation for Education, Science and Community Development in cooperation with the Ministry of Public Health.

His Highness the Amir held a meeting with the officials where they discussed ways to promote the current partnership between both parties in health and medical care.

The Amir was accompanied by members of the official delegation.

His Highness the Amir Sheikh Tamim bin Hamad al-Thani also visited London's financial district, City of London, where he met the Lord Mayor of the City of London, Alderman Charles Bowman, Minister of State for Trade and Export Promotion Rona Fairhead and a number of senior economy and business figures in the United Kingdom.

Lord Alderman Charles Bowman welcomed the Amir during a luncheon banquet that he hosted in his honour and the accompanying delegation, praising the British-Qatari ties and reaffirming the friendship and partnership between Qatar and the United Kingdom, especially in the fields of trade and investment as well as in Qatar National Vision 2030 and the 2022 Qatar World Cup.

During the banquet, cooperation and friendship ties between Qatar and the UK were reviewed along with ways of promoting partnership in economy, trade and investment.