American soccer team visits Qatar Foundation ahead of the launch of 2021 U.S.-Qatar Year of Culture 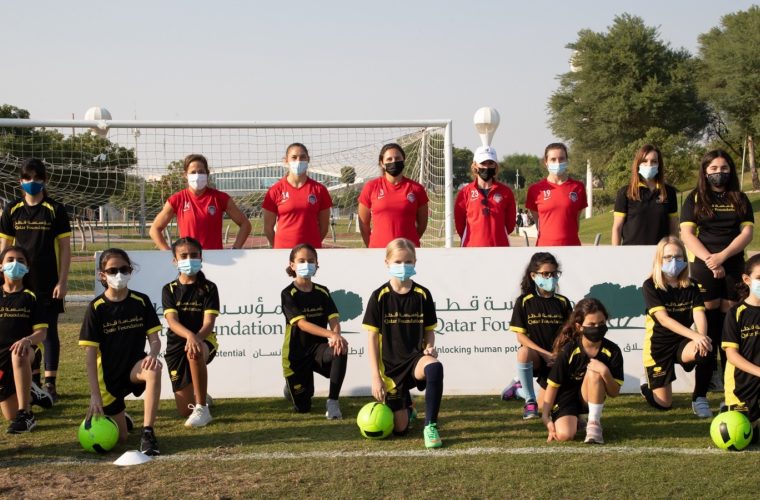 American women’s football team, Washington Spirit, passed on tips and inspiration to school students and young female soccer stars during a visit to Qatar Foundation, ahead of the launch of the 2021 U.S.-Qatar Year of Culture.

The 2021 U.S.-Qatar Year of Culture is the latest edition of a Qatar Museums cultural exchange program that promotes mutual understanding between Qatar and other countries, builds and strengthens friendship bonds, and invites people to explore cultural similarities and differences. Launched in 2013 and supported by Qatar Foundation (QF), it showcases Qatar’s cultural heritage to a global audience, and brings the culture of each year’s country partner to Qatar.

QF played host to Washington Spirit as its players got their first taste of Doha, with their time at Education City including meeting and coaching students from Qatar Academy Doha – one of the schools under QF’s Pre-University Education – and the QF girls’ football team, which includes players in both mainstream and ability-friendly programs, at Oxygen Park.

Washington Spirit goalkeeper Aubrey Bledsoe said: “It’s incredibly important to build bridges between countries – we all have so much to learn from each other, and I think you see how Qatar Foundation really values this, with its different universities and everything being so close together. It’s created an environment where building these bridges can take place.”

And midfielder Dorian Bailey – whose advice to the students and young female footballers she met at QF was “shoot for the stars and do what you love” – said: “Programs like the Years of Culture are important in the way they are able to just blend different cultures and allow people to learn from each other, and that blending of cultures is reiterated at Qatar Foundation.”

Accompanied by Machaille Hassan Al-Naimi, President of Community Development, QF, and embassy officials, the players and team owner Steve Baldwin were given an overview of Education City from the viewing balcony at the 2015 building (QF Headquarters), where they also learned about QF’s 25-year journey of providing opportunities for people to realize their potential through its investment in education, research and innovation, and community development.

A visit to Qatar National Library followed, as – in the build-up to Qatar National Day – the footballing visitors from the U.S. capital gained an insight into how the library preserves and promotes the cultural heritage of Qatar and the region, and empowers people to discover and learn.

And the players also toured QF’s equine and equestrian center Al Shaqab, one of the world-class sporting facilities at Education City, to find out it is ensuring the proud legacy of the Arabian horse breed lives on for future generations.

“Meeting the Washington Spirit players, and learning how commitment and positivity can lead to success and fulfilment in life, has been a real thrill for young members of our QF community and reflects the connection of cultures that is at the heart of Qatar Museums’ Years of Culture program,” said Amy Johnson, Director of Community Engagement, QF.

“As the team participate in the launching of the U.S.-Qatar Year of Culture – which QF is very proud to be supporting – we hope their time at Education City has provided them with an enriching cultural experience, and a deeper understanding of the essence of Qatar.”