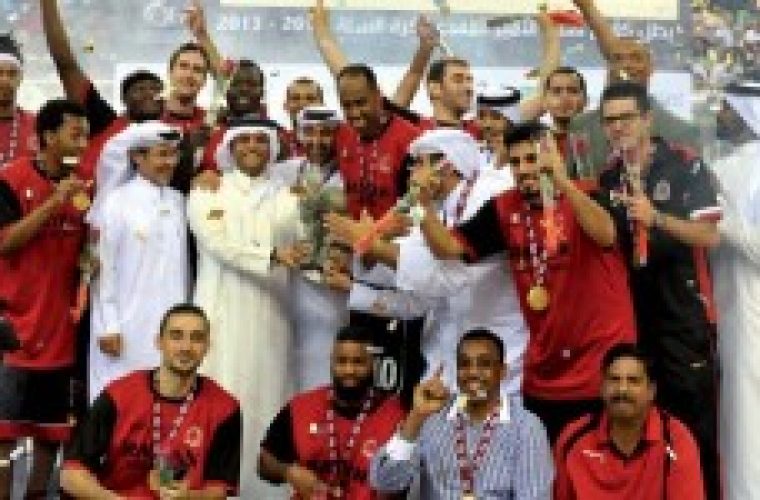 Al Rayyan broke Al Sadd’s towering defense with precise ball rotation and pestered their rivals with swarming attcks to achieve a well-deserved 76-66 victory last night and bag the prestigious Emir Cup title before a jam-packed crowd at the Al Gharafa Indoor Arena. Their eighth Emir Cup crown to date, yesterday’s title was also the second championship title for coach Brian Rowsom and his wards this season having also clinched the Heir Apparent Cup crown a month ago. As Al Rayyan captain and veteran Yaseen Mousa, who sealed the win with a game-ending slam, had predicted winning the title. Yesterday, Al Rayyan did just that! “We were always confident of Al Rayyan claiming a double this season. Al Sadd are a very good team, they were the defending champions, but we were confident of dethroning them,” Musa said. Amidst a sell-out crowd and after a festive finals introductory rites, the protagonists got off to a blazing start. Mousa drew first blood but Chris dela Rosa banked one in from the left flank and Ibrahim Thomas scored from point blank after a Michael Benjamin Southall swat on the defensive end for a 4-2 game start. Tanguy Ngombo drilled a far one from the right to even things up at 6-all after a helter-skelter exchange in the next two minutes. Watson connected from the left but Thomas and Rashad Anderson strung up 5 straight points for Al Sadd to push the white shirts to an 11-8 lead. Things were even again at 12 until Ngombo and Erfan Saeed pumped in a bomber each to lift the black shirts to a 17-12 advantage, with 3 minutes left in the period. Mousa would then bury another from beyond the arc and Jeremeo Davidson added a jumper as Southall and Thomas continued to lord it over on the other end for a 22-19 count to cap first quarter hostilities. Malik Abdullah broke the ice for Rayyan with back-to-back connections in the second period and with Mathew Burston adding 2 from the stripe the seven-time Emir Cup champions raced to a 29-21 lead with barely 2 minutes gone in the period. Chris dela Rosa cut the deficit with a short stab but Malik drilled another trey and Burston scored on a lay-up off an Al Sadd turn-over to make it a double-digit advantage for Rayyan, 34-23. Anderson hit his first rainbow and cashed-in on a put back off a Thomas missed free throw to push Al Sadd to 28 and Ngombo would drill both gift shots on the other end to lift Rayyan to 37. With Southall forced to sit it out after committing his third personal foul, Coach Dejan Tomic’s went to an up-tempo game and banked on the duo of Saad Abdulrahman and Mousa Daoud to carry the fight for the defending champions. As Rayyan’s lead was pruned to 7, Ngombo would fire a long bomber with the shot clock winding down and handed Rayyan a 42-32 cushion before the half time break. Watson fired one from the outside and Davidson scored on a fall away to start Al Rayyan’s early assault in the third and even as Southall rejoined the fray, coach Rowsom’s wards continued to impose their might on the white shirts and soared to a 55-42 advantage. Anderson and Southall would give Al Sadd some breathing spell with a basket each but Al Rayyan behind Watson, Davidson and Erfan were just awesome on the firing end and rose to a 61-47 margin before the final stage of the match. Al Sadd pushed hard at the onset of the fourth period but Rayyan quelled the attack with relentless efforts on both ends of the floor and kept the defending champions at bay, 67-55 as the game clock went down to 5:05. With the game clock down to 3:11, Al Sadd mounted a last ditch stand with an 8-3 run to chop the gap to 7 points at 63-70, with 1:40 remaining in the match. Davidson made it 72-63 with a pair of conversions from the stripe but Anderson drilled a long trey to bring the tally at 66-72. Watson was to be fouled in the next offensive and cashed in on both charities while Al Sadd muffed their chance in the ensuing possession. Source : Qatar Chronicle