A winner all the way 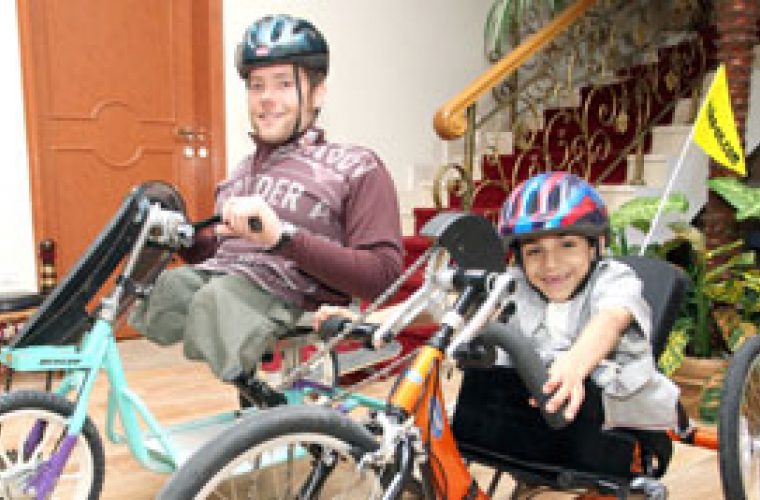 Ghanim Mohamed al-Muftah, the Qatari boy who has become a beacon of hope for physically-challenged children, and the world’s fastest mono skier Tyler J Walker, an American, share a strong bond. Both Ghanim, who celebrates his seventh birthday on May 5, and 23-year-old Tyler, who is likely to be selected for the 2010 Paralympics, were born with caudal regression syndrome (CRS) or absence of distal segments of the spine. “Tyler is my best friend,” a beaming Ghanim told Gulf Times yesterday while hugging his ‘big friend,’ a member of the US Adaptive Ski Team since 2003. “We are having fun,” quipped Tyler, the World Downhill Ski Champion in the Disabled World Cup Circuit, while thoroughly enjoying his little friend’s antics and playfully pretending that the boy is choking him. Ghanim does not have the lower half of his spine, a main characteristic of CRS, and the lower half of his body is paralysed, whereas Tyler’s legs were amputated above the knees when he was just four. Tyler, currently in Qatar as a guest of Ghanim’s family for the second time in two years, has become the boy’s hero and a symbol of hope and inspiration for his parents. “Before I met Tyler I was always worried about Ghanim’s future,” his mother Eman said, with relief writ large on her face. Tyler, who graduated from the University of New Hampshire in September 2008 with majors in geography and international affairs, is teaching new skills to Ghanim, including skating. The two met for the first time two summers ago in Germany after Eman learnt about him through the Internet. “Now I know Ghanim can be independent, just like Tyler,” she said. Given very little chances of survival by doctors initially, Ghanim, whose name means ‘winner’ in Arabic, continues to amaze everyone with his progress. A Year 1 student of Global Academy, he loves wearing shoes on his hands, and has a passion for football with his ‘normal sized’ classmates. “Ghanim’s family is treating him like a normal child, which is a very positive aspect,” observed Patti Rempel, a family friend. The boy can now do several things by himself, such as opening the door of the house, switching the lights on and off or fetching the TV remote control for his mom. Though all these tasks require considerable effort from his little body, Ghanim is taking everything in his stride. He propels himself with his arms, be it moving fast on the floor, climbing on a couch, or showing off some tricks on the skateboard or hand-pedalled cycle. Tyler is clearly impressed. “If I do something new, Ghanim just watches me and imitates me,” said the gold medallist in Mono Skier X, a fast and furious course race that features racing over tabletop jumps, banked turns, rollers and gaps. The young achiever, who has visited about 15 countries, mostly for skiing, is all praise for Ghanim’s family. “They have gone out of their way to show me their culture,” he said. Eman, who was earlier trying to make life easy for Ghanim by making everything his size, has now stopped doing that. He is growing up like his two normal siblings, twin brother Ahmed and elder sister Ghareesa. Both Eman and her husband Mohamed Ahmad al-Muftah had given up their government jobs, shortly after Ghanim was born, in order to find time to care for him. Inspired by the boy’s fighting spirit, Eman has prepared and published books and CDs about his life, all with the aim of raising awareness in the society. Gulf Times had profiled Ghanem, for the first time, in June 2003, and followed up with reports in the daily in August the same year and in May 2005. http://gulf-times.com/site/topics/article.asp?cu_no=2&item_no=287374&version=1&template_id=36&parent_id=16