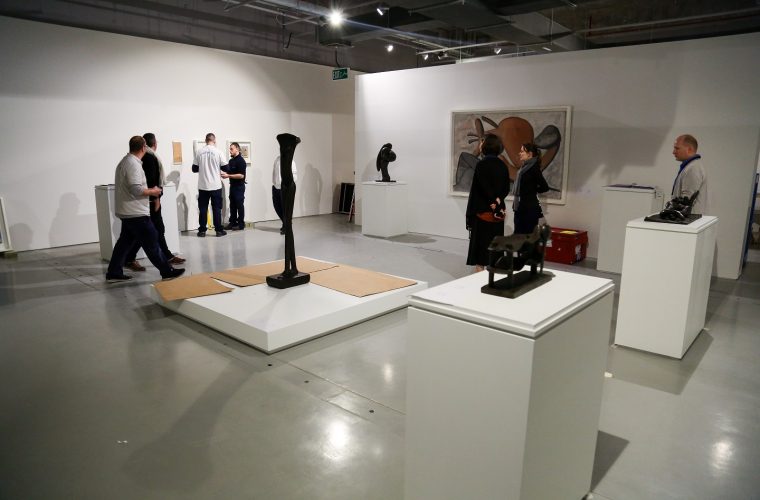 A new exhibition by Qatar Museums taking place in Qatar’s Fire Station Gallery showcases the rare artistic relationship between artists Pablo Picasso and Alberto Giacometti that came about as a result of their friendship.

The collaboration between the Fondation Giacometti in Paris and the Musée national Picasso-Paris, brings together over 120 works from both artists. The collection is unique because the relationship between the two artists has rarely been documented and can be seen quite clearly through their works.

The exhibition has been organized by curator and director of the Fondation, Catherine Grenier, with associate curators, Serena Bucalo-Mussely and Virginie Perdrisot, under the patronage of Qatar Museums chairperson, Her Highness Sheikha Al Mayassa bint Hamad bin Khalifa Al Thani.

We spoke with curator Catherine Grenier to find out a little more about the exhibition, how it came about, and why it’s been brought to Qatar!

By bringing the exhibition to Qatar, Grenier said that the Fondation hopes that the works of the artists can be introduced to newer audiences and perhaps develop an interest in them and the field.

An interesting feature of the exhibition here in Qatar is that it also has four replicas of Giacometti’s works for the visually-impaired to be able to enjoy. Grenier said that Qatar Museums was quite keen on including this feature in the exhibition and that it’s also a part of the vision of the Fondation Giacometti to make art simple and more accessible for everyone. In addition, there are interactive educational activities for children, teachers, and families to enjoy.

The Fondation Giacometti possesses a large collection of the artist’s works and his writings, which is where his relationship with Picasso was discovered. He’s said to have written to his family about the latter quite often. Since the relationship was not very well-known but there seemed to be clear evidence pointing to it, Grenier and her team did some research, talking to biographers and watching films made about the two artists to further understand their relationship. What interested her and her colleagues, she said, was the fact that they not only shared a friendship, but that their artistic dialogue could be seen in their works during the 1930s and in the beginning of the 1950s.

On why the relationship has seldom before been documented, Grenier said, “Picasso is such a giant artist that people don’t really put emphasis on other artists.” She said that their relationship had not been chronicled as such, that it could very easily have been forgotten. Furthermore, she said that the archives at the Fondation Giacometti have only recently been opened to scholars, which was previously not the case.

Grenier believes that the legacy of the artistic relationship between Picasso and Giacometti is quite significant in the world of art. “We can’t forget that artists are not creating alone. To create, you need to be in communication with society, friends, partners. It’s good to remind people that even geniuses are open to opinions, contradictions, critics and new ideas,” she said.

Have you been out to experience the Picasso-Giacometti exhibition already? Tell us what you thought about it in the comments below and don’t forget to give us a like and a share – it keeps us going!