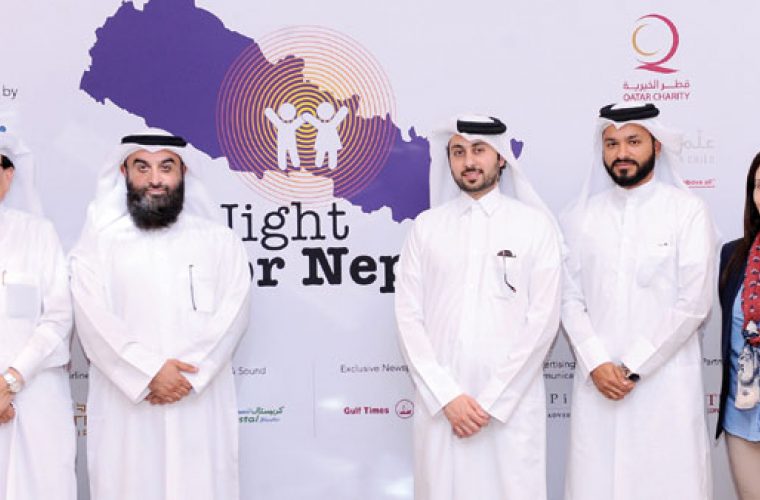 At least 600 benefactors from the Qatari and expatriate communities will gather at ‘A Night for Nepal’ charity dinner and auction tomorrow at Grand Hyatt Doha (starting 6.30pm).
The event is being organised to support the needs of several hundreds of schoolchildren of Nepal, who were among the millions affected by the two devastating earthquakes that rocked the Himalayan nation in April.
The number of benefactors could go up to 800, according to the groups hosting the three-hour event. An array of cultural and entertainment events will be presented by the contingents representing the local Indian, Nigerian, Mexican, Korean, Thai, Vietnamese and Indonesian communities. A total of 11 teams are expected to perform.
Four local Qatari non-profit organisations Qatar Charity, Educate A Child, Reach Out To Asia (Rota) and All For One are joining hands for the humanitarian cause, said their representatives yesterday.
Representing the four forums, Ibrahim al-Abil (Qatar Charity), Fahad al-Obaidaly (All For One), Mohamed Jassim al-Na’ama (Rota), and Ali al-Subaie (Educate A Child) were present.
They explained that inquiries revealed that more than 2,000 classrooms and 8,600 homes were completely destroyed in Kathmandu and Pokhra, besides causing extensive damage to several thousands of homes and hundreds of school buildings.
Al-Obaidly said since their forum’s (All for One) launch in 2012 they have been able to work closely with the country’s workers groups deployed in various construction sites more than once and in 2013 the organisation’s ‘Water for Workers’ campaign received a lot of public attention and many benefactors came out in support of the initiative.
“Our efforts were lauded by the United Nations at different levels seeing it as a model worth emulating by others,” said al-Obaidly, who has been recognised as one of the global ambassadors for the campaign to help the workers’ by the United Nations Organisation for Co-ordinating Humanitarian Affairs (UNOCHA).
Obaidaly and other representatives said the charity auction to be hosted by acclaimed auctioneers Christie’s of London would feature many unique articles, jewels and art works. A number of paintings by Qatari artist Yusuf Ahmed will be up for auction, including a few theme-related works, based on the real happenings in the wake of the earthquake.
The event aims to raise proceeds not only for the immediate relief but also for supporting the long-term requirements of the people affected by the disaster.
Qatar’s Minister of Culture, Arts and Heritage HE Dr Hamad bin Abdul Aziz al-Kuwari will be present among others at the charity auction. Well-known pianist Sonja Park will perform on the occasion.