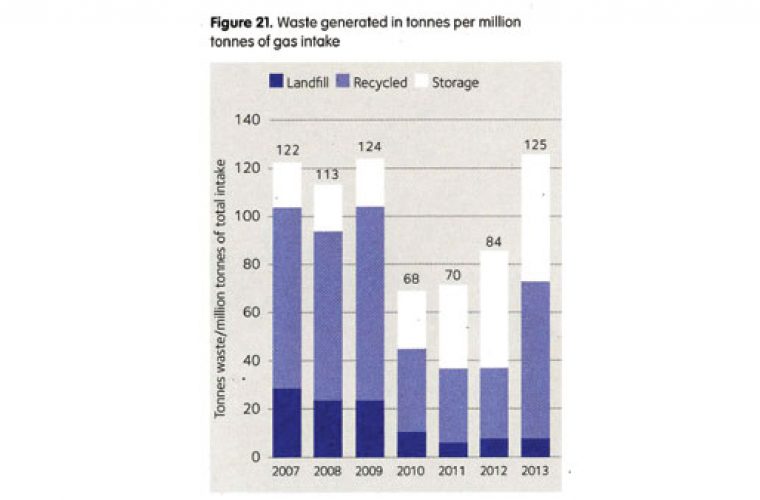 RasGas has been able to recycle 58% of the waste it generated in 2013, outperforming 14 other companies in Qatar’s oil and gas sector.

According to the company’s Sustainability Report 2013, the total weight of waste RasGas generated and managed last year increased to 126 tonnes per million tonnes of total gas intake. In contrast, the waste generated by Qatar’s liquefied natural gas (LNG) industry average was recorded at 151 tonnes per million tonnes of the total gas intake in 2013.

But despite the increase, the amount remained lower than LNG industry averages. The report stressed that the 58% of the waste recycled in 2013 was the company’s “best performance” among 14 other companies participating in the annual benchmark.

RasGas attributed the increase in the total weight of waste generated and managed to the company’s five major shutdowns and additional tank-cleaning activities.

The report said large volumes of waste, including catalyst waste, spent molecular sieves and process sludge that represent the most number of significant waste streams – “must be dealt with on a continuous basis and at peak times such as during shutdowns.”

“In 2013, we upgraded the 54 waste collection points on the plant site to improve waste identification, segregation, collection, and containment. Our waste information system enables collection point in real time and alert management if action is necessary,” the report stated.

The report added that the quantity of pyrophoric waste – one of the most hazardous wastes because of the flammability risks it poses, doubled in 2013 due to shutdowns.

“We have introduced better designed skips and pyrophoric bags to handle these materials. These are frequently inspected and the waste information system enables rapid action if needed,” RasGas explained in the report.

Also in 2013, RasGas introduced new sludge management equipment that enables it to reduce waste storage and increase percentage of recycling by more than 150%. The amount of sludge waste stored has been reduced by 98% with the remaining 2% of solid waste to be treated by a new thermal desorption unit before safe disposal.

The award was given for waste management, including the waste information system, a project to manage waste from molecular sieves and the company’s approach to pyrophoric materials management.RasGas was selected as the winner out of 53 submissions from 26 organisations, the report said.