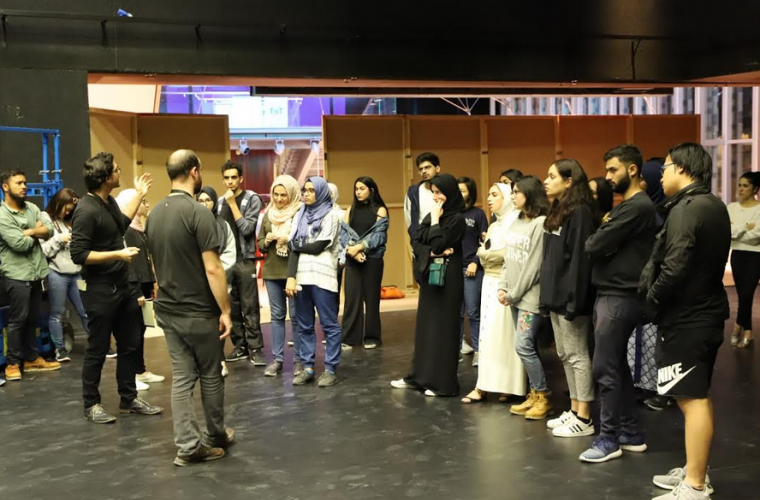 NU-Q Using film, photography, creative writing, and performance, more than 30 Northwestern students worked over the weekend to produce eight projects around the theme of “Borders and Boundaries.”

Over a 48-hour period students guided by leading professionals conceive, develop, and create varied media projects around a common theme that acknowledges the challenges of the blockade of Qatar. Beginning on a Friday evening and concluding on Sunday when the work created is presented to the public, the festival emphasizes collaboration and teamwork among students. While some students have performance roles, others work behind the scenes with operational and administrative responsibilities.

The students’ final projects will be exhibited at 6:00 p.m. on Sunday, February 11, 2018, in the Forum at NU-Q.
The NU-Q Creative Media Festival was supervised by Tom Casserly, a Northwestern alumnus and New York-based theater producer, and George Bajalia, a theater artist and cultural critic from Columbia University.

“The festival is a platform for student creativity that benefits from exceptional mentors including a successful Broadway producer, a theater artist, and an actor. Students work around the clock going through all aspects of creation and production to achieve a final result,” said Everette E. Dennis, dean and CEO.
In addition to getting support from Casserly and Bajalia, the participants will also work with Caitlin Cassidy, an actress and singer, who is a fellow with Georgetown University’s Laboratory for Global Performance and Politics; NU-Q Professors Rana Kazkaz and Hasan Mahmud as well as VCU-Q’s George Awde.
Casserly and Bajalia, who have jointly organized the Youmein Creative Media Festival in Tangier, Morocco since 2015, have extensive experience in the creative arts, theater, and media industries.

“The festival’s goal,” Casserly said, “is to provide students an outlet to apply technologies and techniques learned in the classroom to a public-facing context, guided by mentors and creative professionals.”
The final presentations by the participants – on February 11 at 6:00 p.m. at NU-Q – is open to the public.