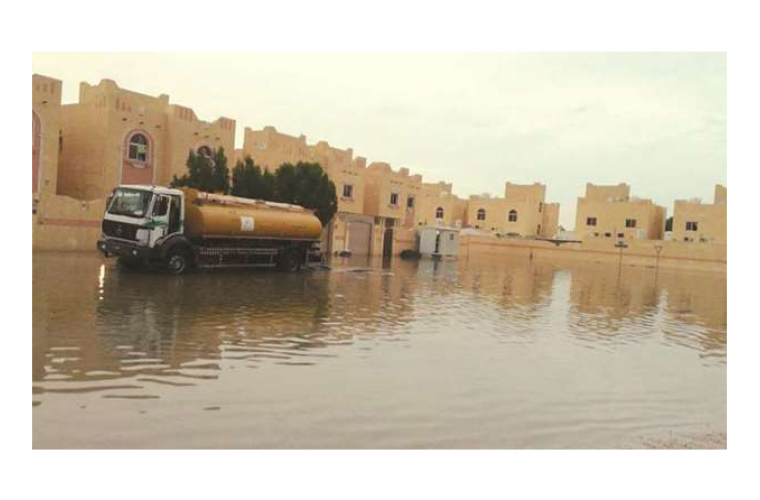 Intensive efforts to drain out rainwater continued yesterday, a day after heavy showers led to waterlogging around Doha and other parts of the country.

Rain emergency teams in different municipalities had removed some 43mn gallons of accumulated water in 6,720 batches from Thursday afternoon until yesterday morning, the Ministry of Municipality and Environment (MME) said in a statement. Some 95% of the affected major roads were cleared of rainwater and efforts were continuing on to remove water from internal roads and residential areas.

The teams deployed 307 tankers in co-operation with the Public Works Authority (Ashghal) and the security departments concerned, particularly the Civil Defence, Lekhwiya and Traffic Department, to carry our their work in order to ease traffic circulation.

More than 95% of the affected main and secondary roads were cleared of water and efforts were under way to clear internal roads and residential areas, it was observed.

He said operation rooms in different municipalities had received around 1,555 reports of water accumulation and work was still under way.

Meanwhile, Ashghal said water had been removed from most tunnels, which had experienced waterlogging on Saturday, and these were opened to traffic yesterday morning.

Later in the day, the authority tweeted that the Immigration Interchange tunnel was also cleared of water and it was opened to traffic while work was under way at the Omar Bin Al Khattab tunnel and a tunnel at the Sheikh Khalid Bin Hamad Al-Thani Interchange on Al Rayyan Road.

On Saturday, Ashghal had said heavy rainfall caused partial closures in tunnels at Al Messila, Al Sadd, Al Rayyan/22 February Street and Immigration Intersection, besides Al Rayyan Road tunnels and the Omar Bin Al Khattab tunnel. The authority had urged motorists to avoid using these tunnels until they were cleared and opened to traffic.

In another post on Twitter, Ashghal stressed that it works with the MME round the clock to monitor main roads and drainage networks across the country via the authority’s emergency room to facilitate water removal from different areas in Qatar.

The state of alert and despatch of equipment and mechanisms for the rapid withdrawal of rainwater that had accumulated in some areas “has been upgraded and co-ordinated with the authority’s task forces, municipalities and various entities in several locations to speed up the response”, Ashghal added.

Ashghal also tweeted a picture of its emergency room, where work was under way round the clock to monitor drainage networks and respond to water accumulation.

HE the Prime Minister and Minister of Interior Sheikh Abdullah bin Nasser bin Khalifa al-Thani had visited the rain emergency room of Ashghal on Saturday evening to closely review all the procedures taken to drain out rainwater from roads and ease traffic circulation.