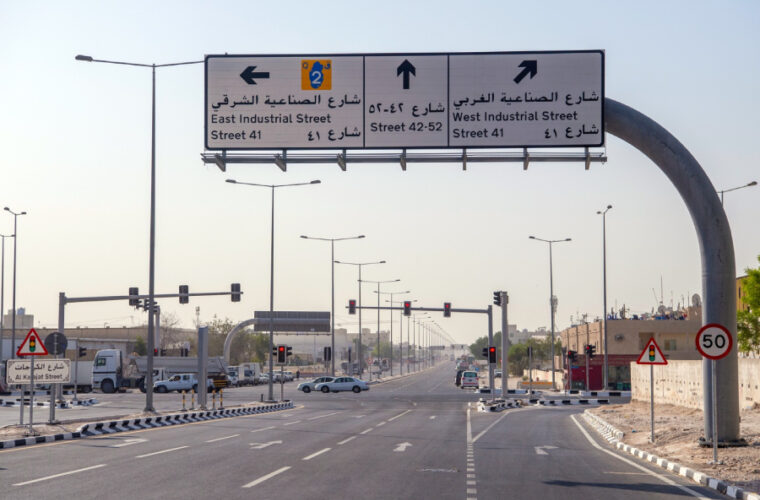 The Public Works Authority (Ashghal) announced that all roads within the Roads and Infrastructure Project in Doha Industrial Area, Package 3 are now open to traffic. This comes as part of the Authority's commitment to implement its plan to provide a fully developed road network and full services for the national infrastructure network throughout Qatar.

Project works involved upgrading the streets located between Street no. 33 to the North and G Ring Road to the South, and from East Industrial Area Street (Hamad Port Road) to the East towards Al Kassarat Street to the West, covering a road network of about 40 km. In addition, infrastructure lines were upgraded in order to improve the quality of service. The total project area is approximately 4.57 square kilometers including local streets, intersections, and arterial roads, which are now open to traffic.

As part of the project, and in order to regulate local traffic and improve road safety, 7 signalized junctions and 10 new roundabouts were constructed, in addition to 17 pedestrian crossing signals that were installed in the area. In addition, the project works involved developing the lighting systems and increasing the number of local parking bays by providing an additional 4200 car parking slots in the area.

In this context, Eng. Mohamed Al-Yafei, Project Engineer in Ashghal's Roads Projects Department's Southern Areas Section, highlighted the importance of the projects carried out by the Authority in the Industrial Area and the active role they play in boosting the movement of goods and people. He also highlighted on facilitating local transportation and connectivity with the main roads and expressways, in order to cope with the economic development in the country. Upgrading these roads and opening them to traffic had a significantly positive impact on traffic flow in the Industrial Area, which witnesses high traffic congestion.

“The Authority has previously announced the completion of Packages 1, 2, 4 and 6, with the roads located in each package now open to traffic. These packages collectively serve 2281 plots and provide 85 km of roads," Eng. Al-Yafei added.

Package 3 serves aro​und 816 plots, including shop, factories, warehouses and workshops and provides access links which serve these outlets and plots. Moreover, 40 km of roads were upgraded as part of the project, including collector roads, like Al Wakalat, Al Kassarat, Al Manajer, and Al Binaa Streets; arterial roads, like Streets nos. 37, 41, 47 and 52; and side streets, which were part of the project's scope of works. The scope also involved providing road safety elements, constructing 4200 car parking bays, providing road signage, and installing lighting systems, with 1573 lighting poles installed in the area. In addition, new signalized intersections were constructed on Al Wakalat Street, Al Karajat Street, Al Manajer Street, Street no 52, Street no 41 and Street no 47.

As for infrastructure works, they included constructing Security Control Systems of 49 Km, 13.5 Km of Telecommunications lines, 11.5 Km of potable water lines, foul sewerage network lines of 52 km, and groundwater, surface water, and stormwater drainage network lines of 47 km were all constructed as part of this package.

Some remaining works are currently underway on Street 35, in addition to miscellaneous works on the sidewalks.

It is worth noting that Ashghal relied on local products and manufacturers in carrying out most of the project works, with the local component comprising 70% of the total materials used. The Authority relied on local Qatari resources to procure items like drainage pipes, cables, inspection chambers, collection chambers, insulators, asphalt concrete, lighting poles, and streetlights.