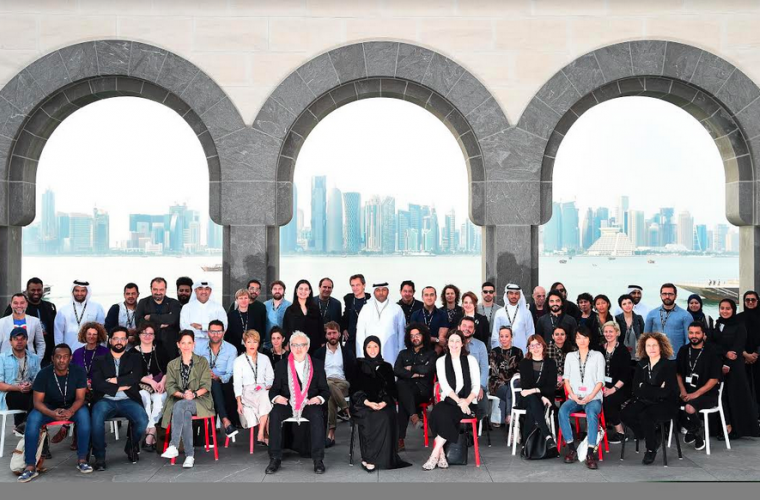 The third edition of Qumra, the industry initiative by the Doha Film Institute, commenced with a celebration of Modern Masters and New Voices in cinema, with accomplished filmmakers and industry professionals as well as emerging talents converging in Doha for a six-day event that aims to nurture the new generation of filmmakers.

Fatma Al Remaihi, Chief Executive Officer of the Doha Film Institute, welcomed the international gathering, and highlighted the role of Qumra as “a modern project incubator, and a specially curated industry matchmaker event that brings together global film experts for learning and for sharing experiences.”

She said: “We established Qumra as an initiative that represents the culmination of our diverse funding, training and development programmes. Our focus remains to cultivate the exchange of knowledge, ideas, creativity and inspiration, and create a supportive and productive space for projects by emerging filmmakers to benefit from interactions with some of the most experienced industry professionals.”

The opening day was marked by the screening of the first Modern Masters screening of Lisbon Story (Germany, Portugal/1994), produced by Qumra Master, the internationally acclaimed producer Paulo Branco. Directed by Wim Wenders, the exquisitely crafted film is regarded as a powerful paean to filmmaking. The screening was followed by a Q&A session with Branco.

“The Masters programme is at the heart of Qumra, and presents a unique opportunity for emerging talents to connect with luminaries of modern cinema and find inspiration in their works and experience,” said Fatma Al Remaihi. “By sharing their personal perspectives on filmmaking, the Qumra Masters provide lasting benefit to our emerging filmmakers and make a meaningful impact on their careers.”

Another highlight of the opening day was the New Voices Shorts Programme screening – featuring five short films by emerging regional talents including Qatari filmmakers. The films screened were: Kashta (2016) by A.J. Al Thani; I Have Been Watching You All Along (2017) by Rawda Al-Thani; Turtles Are Always Home (2016) by Rawane Nassif; RED (2017) by Kholood Mohammed Al-Ali; and Our Time Is Running Out (2017) by Meriem Mesraoua.

“In many ways, these screenings exemplify the Doha Film institute’s work year-round in nurturing emerging talents from Qatar and the wider region. They demonstrate the passion and creativity of our filmmakers, and the support systems that are in place and in action, to further enhance the regional film landscape,” added Fatma Al Remaihi.

On Saturday (March 4, 2017), Qumra will host the Modern Master screening of L’il Quinquin (France, 2014) directed by Qumra Master Bruno Dumont, at 7 PM, and the New Voices in Cinema screening of Holy Cow (Azerbaijan, Germany, Romania, Qatar/2015) by Imamaddin Hasanov at 4 PM. Both screenings are at the Museum of Islamic Arts Auditorium. On Saturday, Paulo Branco will also conduct his Master class for the Qumra delegates. Visit www.dohafilminstitute.com for online and in person ticketing details for the screenings.

Qumra hosts leading international filmmakers, producers, industry experts and professionals, for intense brainstorming, knowledge-sharing and nurturing sessions with talents associated with 34 films from 25 countries. Directors and producers attached to 18 narrative feature films, 7 feature documentaries and 9 short films are participating in the event being held until March 8 at Souq Al Waqif and the Museum of Islamic Arts.

New to Qumra this year are the Accredited Delegates Programme, developed for professionals from diverse backgrounds which will allow 100 local and regional delegates to access more opportunities and be a part of the platform for discovery, and ‘Qumra Talks’, a series of three specially curated discussions that gathers leaders from the technology, film, TV and online worlds to share their insights on trending topics impacting the international film industry.