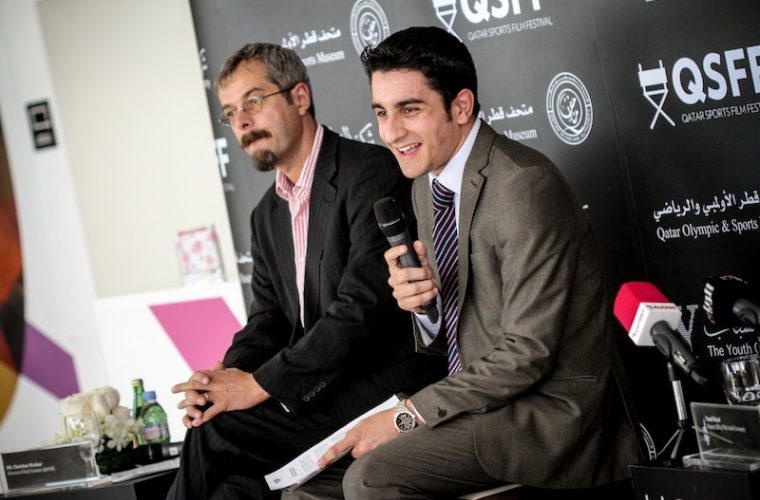 The Youth Company, a social enterprise for youth development, and the Qatar Olympic & Sports Museum are honored to announce the Qatar Sports Film Festival (QSFF) under the patronage of FICTS (Fédération Internationale Cinéma Télévision Sportifs), which is going to take place on May 24 – May 25, 2013 at ALRIWAQ DOHA exhibition space. The first of its kind in the region, the QSFF aims to promote the art of screenwriting and filmmaking in the world of sports and the Olympics while also encouraging engagement with sports and a healthy lifestyle. The 2013 Qatar Sports Film Festival is a two-day festival that includes a short film contest and public screenings of various sports documentaries. Since the beginning of April 2013 filmmakers and sports fans were encouraged to submit short films that focus on a sport related theme such as sport games, sport values, teamwork, large sporting events, ancient Olympia, modern Olympic Games and competition. From the variety of submissions, which were received from different parts of the world, the TOP 5 will be screened during the opening night, on Friday, May 24. Winners will receive cash prizes of 10.000 QR for the first place, 8.000 QR for the second place, and 6.000 QR forthe third place, and will be further advertised by FICTS. The QSFF will have its official opening on Friday, May 24 at 5pm and the public is invited to attend the event. During the opening ceremony guests will be able to meet organizers and supporters and talk with some of the directors and producers of the TOP 5 short films. Public screenings of sports documentaries will follow afterwards until 11pm. The program will continue on Saturday afternoon at 4pm. The line up of the films include “I Want to Run – The Toughest Race in the World” (Germany, 2011), “Le Mans: Chasing the Dream” (UK, 2007), “Blue Horizon” (Australia, 2004), “Big Wall Challenge” (Japan, 2008), “Ginger: More than a Game” (Serbia, 2012), and “One Revolution – The Story of Chris Waddell’s Journey to the Roof of Africa” (USA, 2010). All the films feature individual stories of people, professional sportsmen or sport lovers in racing, mountaineering, surfing, basketball or running, all united by their passion for sports. “We are excited to host the QSFF in our exhibition Olympics – Past and Present, as it provides a unique and congenial atmosphere for the festival. We are confident that the film contest inspires many local filmmakers to present their perspective of sports in Qatar and contribute in this way to the sports heritage”, says Dr. Christian Wacker, Director of Qatar Olympic & Sports Museum. The highlight of the festival is the film “Soufian: Leo Messi’s Idol” (Spain, 2012), telling the story of Soufian Bouyinza Dabbou, an 11-year-old boy, who plays football and basketball like any other schoolboy. He is a happy, smiling boy, determined to make his dreams come true, but what makes him so special is that he has no legs. Both limbs were amputated when he was eight. Since then, he walks with artificial legs that have been fine-tuned so that he can enjoy sports, especially his passion for the Barcelona Football Club and Messi. His positive attitude and his way of facing challenges are very inspiring. “In an attempt to raise a healthier generation, it is not enough to have all required sports facilities and make them accessible for the public. It is also important to create a culture for sports, make it visible, that having an active and healthy lifestyle is in trend,” said Aya Abu Issa, Chief Executive Director of The Youth Company. “Apart from promoting engagement with sports, all documentaries, in the program teach us courage, resilience, persistence, will and hope through stories of people, who had to overcome disability, gender stereotypes, social disadvantages and other obstacles in following their dreams. The message, which we would like to transmit through the QSFF, is perfectly represented by the quote for one of the films: “It is not what happens to you. It is what you do with what happens to you”. All screenings are free for the public to attend. More details about the festival and the short film contest can be found on www.qsff.org.