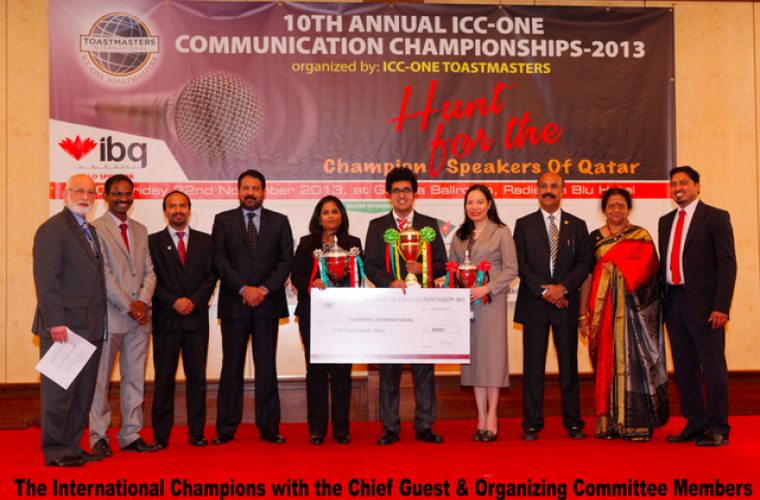 Enthusiasts wanting to learn from those, who had mastered the art of good communication, were treated to a variety of styles, innovative ideas, hilarious anecdotes and pertinent messages at the 10th ICC One Communication Championships 2013 Grand Finale held at the Giwana Ballroom of the Radisson Blu. The Grand finale saw a large number of attendees which included academic experts and representatives from the country’s most outstanding universities in addition to a large audience of supporters. The Communication Championships is being conducted by the ICC ONE Toastmasters as part of its commitment to the Community and to promote Communication and Leadership skills for a record 10 years saw the participation of Qatar’s best speakers. They showcased their communications skills for the International and Humorous Categories during the pre-qualifying rounds and the top 6 in each Category moved to the Grand Finale. This year the Club introduced a Contest for junior residents of Qatar between the age of 12 and 18 years to qualify through their schools. In the INTERNATIONAL SPEECH CONTEST, the Contest Chair was LUBNA MOHAMMED AL QATAWNEH, a Jordanian member of Doha Toastmasters working with Barwa Bank. The Champion was Emad Mansoor Alam, a Pakistani National and 4th Year medical student at Weill Cornell Medical College, Qatar Campus. In his speech Titled: “Education in the 21st Century: An institutional propaganda against humanity”, he highlighted that Education has become a journey without knowing the destination. He expressed that Education should transform people, to feel humane. The Second Placed Winner was Nisha Shivram, an Indian working as Office Manager at a Sports Contracting Company. Her speech Titled “Words are all we have”, strongly covered that Words have the power to make or break a life. She narrated how she started replacing hurting words with healing ones after an incident where a neighbor-hood mother missed her son caused by harsh words. The Third Placed Winner was Clarivic Mendiola Vistal a Filipino High School Teacher in a reputed School of Qatar. In her speech, titled “X-Ray Vision”, she highlighted that we will realize that each one is a beautiful creation of God, if seen with an X-ray vision. The change begins in the mind which gets transformed to the body for action. Nisha Shivram was adjudged as the “Audience Popular Vote Winner”. In the HUMOROUS SPEECH CONTEST, the Contest Chair was NERIEZA SUYOM DIMALAO, a Filipina member of Oryx Toastmasters working with Qatar Airways. The Champion was Devdas Kisan Tamboli, an Indian working as Projects Engineer at (Kahramaa). In his speech Title: “ABCD” AB Stands for Angry Beauty, the wife. CD stands for Chilling Donkey, the husband. He regaled the audience with his hilarious anecdotes spiced with funny body movements offering advice how to tackle an angry wife. The Second Placed Winner was Surendra Kumar – an Indian Working as Asst. Branch Manager at the Sales department of a Construction Equipments Company. His speech was titled: “Insult” and he had the audience in splits with his wife bashing him with suitable response to his sarcastic remarks. The Third Placed Winner was Ashfaque Khan Deshmukh – an Indian , who is the IT Manager for a local Group of companies. In his speech Titled “Paul’s English”, he dealt with the problems of people whose native language is not English and how “Parvez Alam Usman Lambadi” became ‘Paul’. The Champion Devdas Kisan Tamboli was also pronounced as “Audience Popular Vote Winner”. In the JUNIOR SPEECH CONTEST, the Contest Chair was CHADIA MANSOUR, a Tunisian member of Talking Matters Toastmasters working as a Teacher at Qatar University. The Champion was Aditya Divakar Karkera an Indian student of Grade X at Birla Public School. Through his speech Titled "Legacy”, this young man exhorted the audience to do good work and leave a legacy to be remembered by! The Second Placed Winner was Issa El-Fahoum – a Canadian student of Grade XII at Ideal Indian School. In his speech, titled “My Dilemma”, he talked of Parents pressurizing / imposing their choice on their children against the Children’s wishes. The Third Placed Winner was Mohammed Shaheen – an Indian student of Grade XII at MES Indian School. In his speech, titled “A Big Fat Jerk”, he reminisced on his own experience of how students bully others to react in unwanted ways, which they repent later and become good friends. Aditya Divakar Karkera also went on to pick up the “Audience Popular Vote Winner”. Birla Public School was presented with a Trophy as the “SCHOOL CONTEST WINNER” and so were the other two Schools, Ideal Indian School and MES Indian School. The Master of Ceremonies for the mega event was EMAN MOHAMED ISMAIL an American non-Toastmaster working as Senior HR Co-ordinator with Doha Bank. The Winners besides the Trophies, took away a host of Prizes, Cash awards and Air Tickets. The audience participated in the free Lucky Draw with 10 Prizes given away. The event ended with a sumptuous Dinner. Mr. Ruban Devadas, Chief Coordinator of the Communication Championships said: "We congratulate all the winners and all the participants that contributed to the success of this year’s competition. We would like to thank our numerous generous sponsors and the ever willing multi-national Judges for their continuous support and assistance towards the success of this competition.” - ILQ News -